Please ensure Javascript is enabled for purposes of website accessibility
Log In Help Join The Motley Fool
Free Article Join Over 1 Million Premium Members And Get More In-Depth Stock Guidance and Research
By Anders Bylund - Apr 24, 2017 at 9:42AM

Business risks are a fact of life -- even for your favorite and most trusted investments.

It's no secret that I'm bullish on Netflix (NFLX -1.96%). The digital video giant is the largest holding in my portfolio, after all. If the stock looked too risky, I'd be taking at least some of my Netflix profits off the table and investing them elsewhere.

But it never hurts to take a hard, critical look at even your strongest-conviction stocks. On that note, I'm here to ponder what Netflix still could do better -- and what it would take to put my finger on that "sell" button. 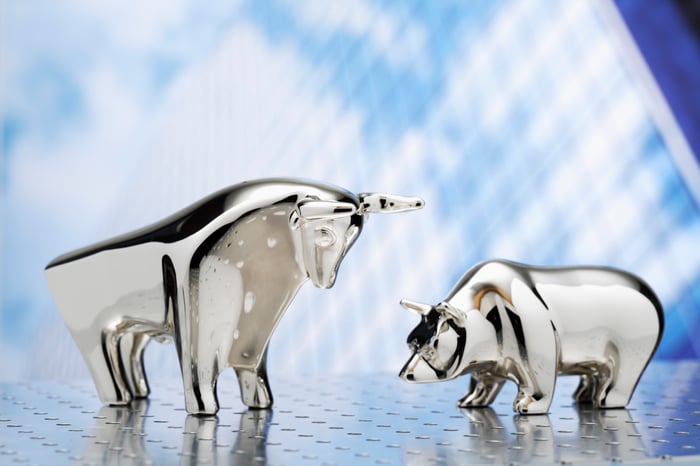 Okay, so it's difficult to pin a "correct" market value on Netflix shares today. That has been true for years, and will be for a few more years. Without significant earnings or positive cash flows, investors are left guessing at the company's powers to create long-term value -- or destroy it.

I mean, this table is enough to give a value investor the shivers:

The shivers, I say!

Some of these metrics are at least moving in a more comfortable direction now, but it's a mixed bag. In particular, Netflix is more expensive today than a year ago if you measure it by enterprise value over EBITDA profits or price-to-sales ratios. And again, discounted cash flow calculations are useless until Netflix gets its cash profits up into positive territory. Today, trailing free cash flows stand at a negative $1.8 billion.

All of these figures will eventually need to step down from their current nosebleed seats. I'm not asking for an overnight revolution here, and none of the figures in that table are deal-breakers for me. But if the refocus on profitable operations doesn't produce results within the next couple of years, something's wrong on a fundamental level.

To misquote Elizabeth Barrett Browning's famous "Sonnet 43" here, in honor of April being National Poetry Month: "How might you fail me? Let me count the ways."

That last one is a biggie, and I'm kind of amazed that none of Netflix's many rivals have taken the hint yet. In the early days, cable companies could have simply promoted the snot out of their on-demand offerings. Right about now, the largest threat to Netflix would be a major studio forgetting all about its decades of Hollywood connections and traditions, throwing caution to the wind. The recipe can be find four sentences above. That's what it takes to stop the Netflix juggernaut, and nobody has the guts to pull that trigger.

These are the things that I worry about, and that could end my Netflix ownership in a hurry.

Until then, I remain an unabashed Netflix bull for the long haul. No business is without risks, and I can live with these threats for now.