Facebook's VR camera design could be a huge threat or a big opportunity for GoPro, which has its own sights set on VR.

Facebook (META 0.94%) took a major step forward in its virtual reality efforts last week, introducing two new camera rig designs and a platform that will allow users to view more depth when moving through a VR experience. The 6- and 24-camera rigs will be licensed to camera companies for launch later this year, aiming to build content for the Oculus ecosystem Facebook has been building.

The first company I thought of when I saw the release was GoPro Inc (GPRO 0.42%), which has its own 6-camera rig called Omni. And I would expect the company to be releasing a new camera to make more VR content in short order. Ironically, management introduced a pilot program for a new camera called Fusion within hours of the Facebook launch, but it's worth looking at where Facebook may create new competition, and where it may actually help GoPro long term. 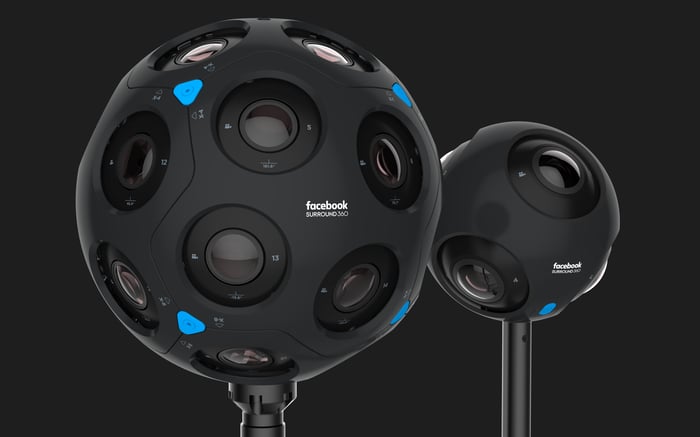 I think it's important to understand what Facebook is doing with its x6 and x24 camera designs. Facebook has designed a camera that it wants others to make so it can build a VR content platform and software behind it that will then use Oculus for viewing. Facebook doesn't want to be a camera manufacturer, and the designs it created are open-source, meaning anyone can use them. What it wants is to be the content platform of choice.

What Facebook could do is level the playing field in VR cameras. An open-source design means anyone could make a camera -- potentially rendering proprietary software that stitches images together worthless. GoPro's acquisition of Kolor in 2015 was intended to give the company a lead in VR software, but Facebook may undermine that.

Facebook is essentially trying to commoditize the VR capture devices, making the platform where the value in VR is created. It's even possible it could outsource or open-source VR hardware that's currently under the Oculus business line.

How GoPro could use this to its advantage

For GoPro, this could be a threat to its future VR cameras -- or it could be an opportunity to develop products that work seamlessly with Facebook, leveraging the VR platform the company is building.

Six- and 24-lens cameras could also be part of a broader VR strategy at GoPro. The company introduced a pilot program for a camera called Fusion on Thursday, and while it didn't release many details, it indicated that Fusion will work with existing GoPro hardware and may have a similar form factor. If it's a 2-lens design, that could be a "good" product at an entry price point for consumers.

The "better" and "best" products in the lineup could be a 6-lens and 24-lens design based on GoPro's existing Omni product and Facebook's new open-source designs. In that sense, Facebook could help create an attractive product extension -- instead of being competition.

However, GoPro would need to be early to market with a product that's either based on Facebook's designs or integrates well with its software. Otherwise, GoPro could be left out of a powerful ecosystem with plenty of camera makers willing to fill the product void.

While Facebook's move into VR is troubling for GoPro on the surface, I think the company can view this as more of an opportunity than a threat. A strong VR platform would help drive camera sales, and that's what GoPro needs in this space. And with Omni in the product lineup and Fusion already on the product roadmap for later this year, there could be an opportunity to be an early mover and a preferred device for Facebook VR users.

Time will tell if GoPro can make Facebook's camera design into an opportunity to grow in VR instead of an obstacle in the VR market.