Momentum players are looking for some "pin action."

Considering that Constellium isn't due to report its first-quarter 2017 earnings until Wednesday, that looks like sort of a head-scratcher at first glance -- until you remember what other company reported its first-quarter earnings yesterday: Alcoa (AA).

On Monday after close of trading, Alcoa reported a blowout quarter featuring $1.21 per share in profits -- a very big change from the $1.15 per share that it had lost one year ago. Sales at the American aluminum giant also surged 25% versus last year's first quarter.

Topping off the good news, Alcoa issued new guidance on Monday predicting "global aluminum demand growth of 4.5 to 5 percent over 2016." That's growth not just for Alcoa, you see, but for its competitors as well -- competitors like...Constellium. 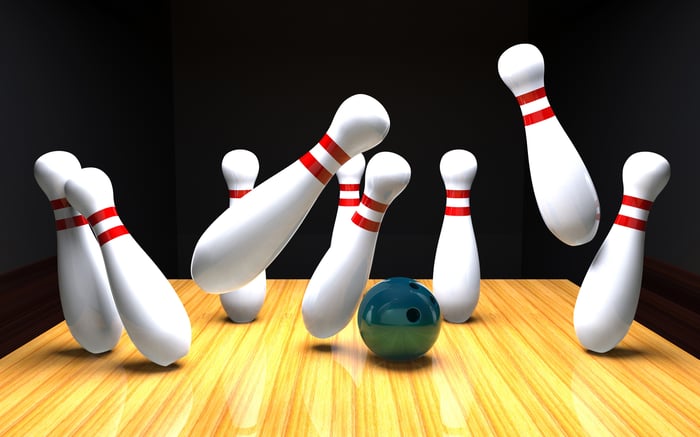 Thus, it seems that the explanation for the sudden rise in stock price at Constellium may actually be comprised of three parts: Firstly, investors are guessing that if Alcoa did well last quarter, it may be the case that Constellium did, too. Secondly, Alcoa's prediction of growing global demand for aluminum is the kind of thing that should directly benefit Constellium in quarters to come.

And of course, there's also the third element: While Alcoa has already gone through its earnings day, Constellium doesn't report until Wednesday. That means there's a very near-term catalyst that could cause the stock to shoot up this week -- just as has already happened for Alcoa stock.

In short, investors buying Constellium today are hoping for a repeat on Wednesday of what happened to Alcoa investors on Tuesday.

Why Constellium Stock Plunged as Much as 15% Today