Despite being the biggest tech IPO in years, Snap Inc. carries several important risk factors that make Facebook the more attractive stock to own now.

As you probably know by now, Snap Inc. (SNAP 1.65%) officially graduated to the big kids table with its recent IPO, joining the likes of Facebook (META -3.08%) and Twitter (TWTR) in the hierarchy of publicly traded social media giants.

As history has shown though, pulling off a high profile IPO is just the first step in what many hope will be a long arc of corporate greatness. So if Snap is to realize its immense potential, it has much more to achieve. Especially with many investors and readers doubting Snap's near-term prospects, let's review why Facebook remains the better stock to own than its vanishing video rival now.

All about the audience

Though it was priced like the next Facebook during its IPO, Snap's underlying fundamentals are closer to those of a much smaller company.

As we saw in its S-1 filing, Snap's growth rates -- while still robust -- are starting to slow into the mid-double digits, which implies it will need to launch at least one (probably more) hit products in order to expand its audience, increase its revenues, and ultimately justify its Facebook-esque valuation.

Let's look at some rough numbers to get a clearer sense of this dynamic. Take a look at the following chart.

Clearly, Facebook easily outperforms Snap in terms of its business footprint, its addressable audience, and the amount of business it yields from each member of its community. And for those that might argue Facebook is an older company, Facebook generated $7.68 in revenue-per-DAU at the time of its IPO . Facebook, simply, has a better business than Snap.

I'll certainly concede that Snap is in the earlier stages of building out its own advertising business, which it only really began in earnest in last year. Current analyst estimates predict Snap's sales will grow to $1 billion this year and climb past $2 billion next year; even if its user base remains static this will still fall well short of Facebook in terms or Rev/DAU.

Moreover, there's certainly a case to be made that Snap's engaging, full-screen ads can serve as an important channel to reach younger consumers. Unfortunately, Snap will have to overcome an increasingly important obstacle in its attempts to make good on its sky-high valuation: Facebook. 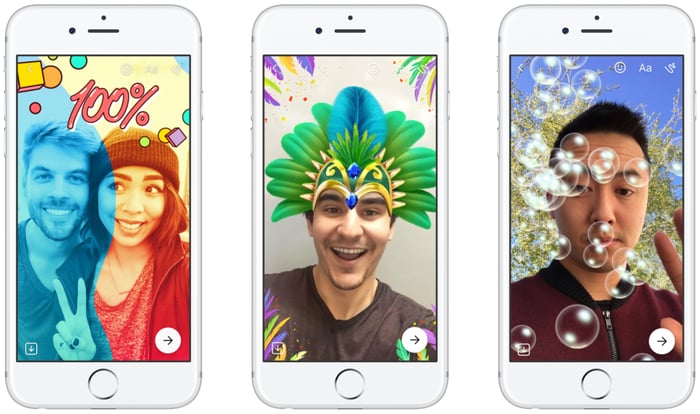 Attack of the clones

As you might have noticed, Facebook has chosen to pursue a "if you can't beat 'em, join 'em" strategy in response to Snap's popularity. Facebook has rolled out a set of virtual carbon copies of Snap's popular Stories feature, which forms a rolling 24-hour montage of a user's videos and images across its vast social media empire.

The assault began at Facebook's Instagram subsidiary, which launched its own Stories-equivalent last November.  Next, the WhatsApp platform released a Snap clone in late February . Facebook Messenger followed suit on March 9.  Finally, on March 28, Facebook incorporated Snap's stories feature into its own flagship app, effectively completing its co-opting of Snap's defining feature across its own social media universe.

Only time will tell to what extent Facebook's copycat behavior actually impacts Snap's user growth. However, a growing number of media outlets are reporting, based off information from a host of sources, that Facebook's copycat products are indeed having their intended effect on Snap.

Among the analyst community, the jury's out as to whether Facebook's efforts to steal Snap's thunder will actually work. In response to Facebook's adding Stories to its core app, Brian White of research firm Drexel Hamilton noted,  "we are not surprised to see another platform copy Snap; however, we believe Snap has a cachet with the millennial crowd that will be difficult for other platforms to garner. Like Apple in its younger days, we view Snap as a disruptive innovator with a laser like focus."

Perhaps more problematic is that Snap will need to increasingly attract users outside of its traditional base of millennials, and many of those it hopes to court are already ensnared in Facebook's app ecosystem, many across multiple apps. Since Facebook has already incorporated Snap-like features into its own apps, the value proposition of adding Snap to their social media constellations, or switching to it as a primary tool, might not be as robust as it has been historically.

Regardless of your opinions on the company of its stock, Snap's initial innovations were indeed major advances within social media. However, given Snap's valuation and competition concerns, I see Facebook as the more appealing growth stock today.