GameStop's share of the video game hardware and software market appears to be stuck in reverse, but the company does see some bright spots.

GameStop (GME -4.79%) is undergoing a transformation that involves growing its collectibles, tech brands, and digital segments to become less reliant on video game hardware and software sales. For context on why the shift is necessary, check out the look at overall revenue and performance for its retail gaming categories across its past two fiscal years:

GameStop is facing falling software sales because of online competition and digital distribution, and its best earnings periods are tied to major console hardware launches. In response, the company is aiming to have 50% of its operating income derived from non-gaming sources by 2019.

Still, video games are the core of GameStop's business for the time being, so let's look at how the retailer views its near-term outlook in the space, with quotes from the company's most recent earnings call, on March 23, coming from S&P Global Market Intelligence. 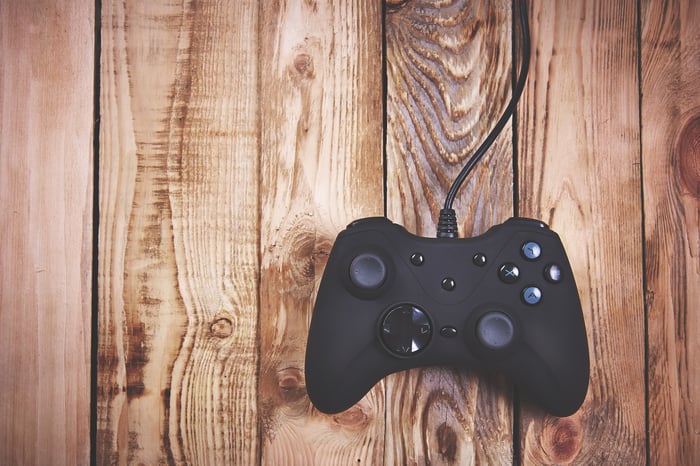 Despite the launch of Sony's (SONY 2.26%) PlayStation 4 Pro and PlayStation VR and Microsoft's (MSFT 3.42%) Xbox One S, 2016 was a tough year for GameStop's hardware sales. Following their respective launches in 2013, combined sales for the PlayStation 4 and Xbox One platforms rapidly outpaced cumulative sales for their predecessor platforms, but sales are now slowing.

Now despite the physical decline, based on our research within our gaming community, the majority of gamers' purchase intent for new consoles is high, with more than 50% of nonowners still planning to upgrade to a PS4 or Xbox One. Purchase intent for Switch and Scorpio is at PS4 levels or higher.

However, in spite of this positive outlook on demand for consoles, GameStop expects that hardware sales will be roughly flat this year, with the launch of the Nintendo Switch and Microsoft Scorpio systems likely to balance out declines from other elements of the category makeup.

Nintendo's handheld-home-console hybrid is off to a strong start after hitting store shelves in March, and GameStop thinks the system has the potential to be a breakout hit. The device has surpassed Nintendo's sales expectations and become the fastest-selling hardware in the company's history, and GameStop has a keen rooting interest in the platform performing well.

Unlike Sony's and Microsoft's video game consoles, which have sizable storage space that encourages digital game purchases, the Switch is geared more toward physical software, so strong adoption for the platform could help to relieve some of the pressure that the retailer is facing from digital distribution. Here's Raines on early sales performance for the Switch:

The demand is incredibly strong for this. ... As soon as we get it into our stores, it's out within hours. And so we're going to be -- we anticipate that we're going to be chasing supply this entire year. The other thing is that every game that's out there -- is out there, to have over a 5.5 attach rate to this signifies that a lot of people are finding this a great platform and they're picking up any games that they can. ... But there's tremendous demand for this, and we just don't know how high it is, because every time we get it out in our stores, it's literally gone.

Executive Vice President Michael Mauler also noted that the Switch is seeing stronger third-party support than Nintendo's Wii U console and that upcoming software announcements and releases could continue to drive demand. GameStop hasn't modeled a breakout performance for Nintendo's latest console into its outlook, so strong sales for Switch hardware and software could present an avenue to outperforming its financial targets this year and beyond.

With online retail and digital distribution creating pressure points, GameStop is looking to maximize the value of its dedicated customer base. Central to that goal is getting new members on board with its PowerUp Rewards programs. Here's Chief Operating Officer Tony Bartel on how customer relationship management is helping the company:

In addition to improving retail efficiency across channels and improving its online retail component for its ThinkGeek collectibles brand, Raines identified the PowerUp Rewards program as an area that the company will be investing in. However, even with momentum for its rewards platforms, the company expects that new and pre-owned video game software sales this year will fall a mid-single-digit percentage and that same-store sales at GameStop stores will range from remaining flat to falling 5% compared with 2016.