It seems that with any company in the refining industry these days, earnings reports have a real "wash, rinse, repeat" sort of feel. After a year of incredible refining margins in 2015, the industry has been stuck with low refining margins. Based on Valero Energy's (NYSE:VLO) most recent earnings report, it looks as though we are still very much in that trough.

Here's a quick look at some of the things that happened at Valero this past quarter, a few changes from management, and what the company expects to see in the coming quarters. 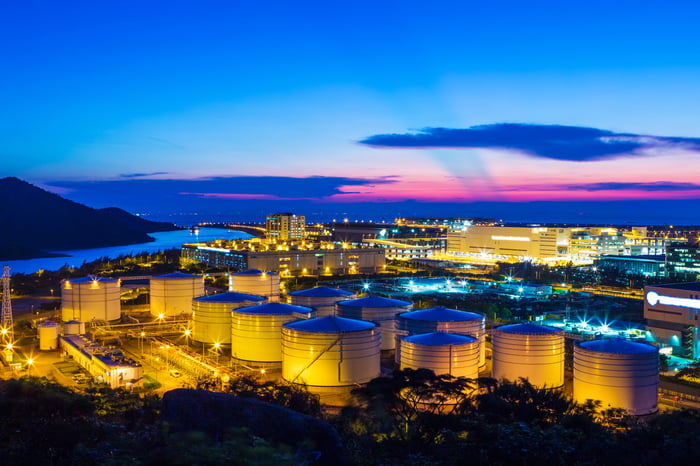 This was another less-than-great quarter for Valero, but most of those woes were out of the company's hands. The largest culprit for declining earnings results were weak refining margins. Average throughput margins per barrel across Valero's entire business was a rather weak $8.14. At that rate, profit margins will be thin as it is. On top of that, though, Valero had a good amount of refining capacity shut down for turnaround work -- utilization rates dropped to 91%.  When you consider all of these things together, Valero's results do look decent.

This past quarter, the company did something a little different: It started reporting on three distinct business lines -- refining, ethanol, and Valero Energy Partners (NYSE: VLP). While it didn't provide the prior quarter's results along these lines in the earnings release, it did give year-over-year numbers. Here's how it broke down. 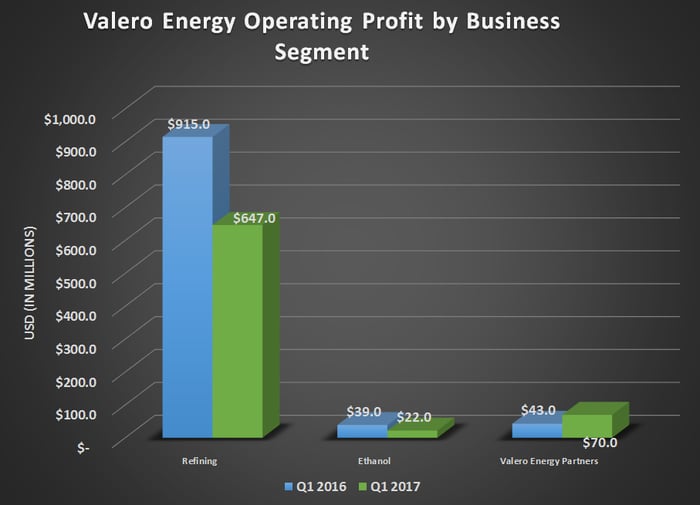 As you might expect, refining is far and away the largest segment of the business. It's worth noting, though, that Valero Energy Partners has grown at a fast clip thanks to several dropdown acquisitions from the parent company as well as the recent purchase of a 40% interest in one of Plains All American Pipeline's pipes that delivers crude oil to Valero's Ardmore, Oklahoma, refinery.

Diving into the refining segment specifically, results were more or less the same on an adjusted basis as this time last year. On top of lower refining margins in general, costs for renewable identification numbers -- the credits necessary to comply with the U.S. EPA's renewable fuel standard -- remain high. Valero estimates that RIN costs will be $749 million for the year.

Breaking down refining into its respective geographies, Gulf Coast operating incomes have remained strong thanks to Valero's refined product exports, which totaled 365,000 barrels per day in the quarter. Its West Coast operations, however, continue to struggle with higher costs. 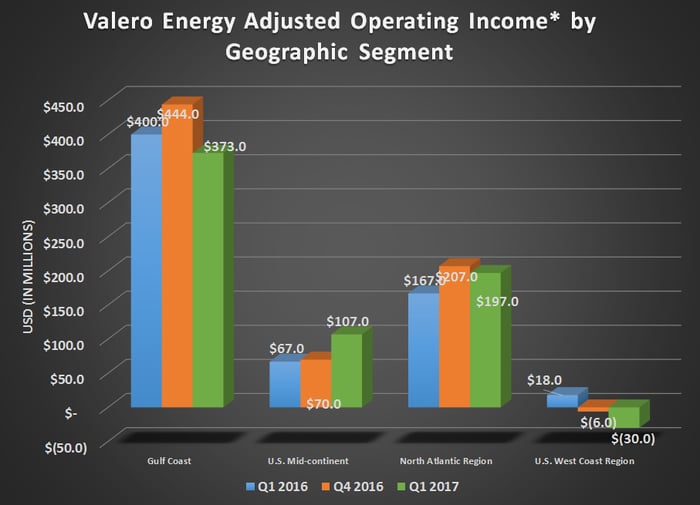 About the company's operations for the quarter, CEO Joe Gorder said:

Our team finished another quarter with solid operating results despite a heavy maintenance schedule. Our focus on safe, reliable operations continues to underpin Valero's ability to deliver distinctive financial performance even in a soft margin environment.

Also, Gorder shared his view on what he and the rest of the team at Valero currently see in the refined product market for the coming quarters:

U.S. refined product inventories have declined and are within their five-year ranges. Demand for gasoline and distillate remains strong both domestically and internationally.  Combined with expectations for continued sweet crude oil production growth and relatively low prices for crude and refined products, consumer demand should be robust this year.

There hasn't been much change in the refining industry over the past year or so. At first, refining margins were low because of rising crude prices that increased feedstock costs. Today, though, high inventory levels of refined product are keeping prices down. Valero and many other refiners conducted a lot of maintenance and turnaround work over the past few months, which should lead to a modest drawdown of inventories. Hopefully, these inventory draws coupled with the summer driving season should boost margins.

Valero has done rather well handling this tougher operating environment and continues to generate plenty of cash to support its spending, dividends, and even buy back some shares. So if it can achieve all these things under tough market conditions, then investors can really look forward to when refining margins revert back to historical means.