These big oil industry names have gone in different directions with their operations. Which one looks like the better buy?

Both of their company names appear on gas station signs around the country, but that's where the similarities between energy companies Sunoco LP (SUN 0.96%) and ConocoPhillips (COP -0.83%) pretty much end. Conoco spun off its retail operations in 2012 to focus exclusively on oil and gas exploration and production, while Sunoco -- now a limited partnership controlled by Energy Transfer Partners (ETP) -- has moved exclusively into downstream operations, selling wholesale and retail gasoline.

Oh, there's one more similarity, too: Both stocks have been hit hard by current weak oil prices. So, let's see which one of these stocks looks like the better bargain today. 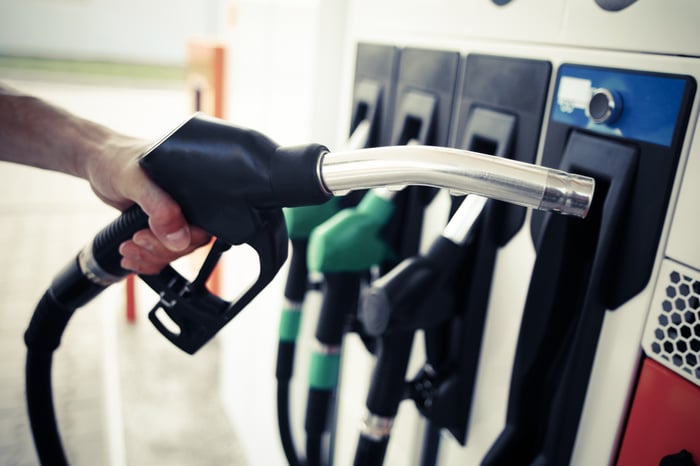 While oil prices -- and energy sector stocks -- are down, a robust dividend can reward patient investors until the market starts to rebound. And it doesn't get more robust than Sunoco's incredible 10.9% current yield. That tops most companies in the sector, including the integrated majors, for which Royal Dutch Shell's current 7.2% dividend yield is best in class.

It also absolutely blows away poor Conoco's lackluster 2.1% dividend yield, but it wasn't always that way. At the beginning of 2015, the companies' dividend yields were nearly identical, at 4.1%. But in 2016, with its debt load rising and oil prices slumping, Conoco slashed its quarterly dividend from $0.74/share to just $0.25/share. Sunoco held its dividend steady, even in the face of mounting debt.

We'll look at how that debt is affecting Sunoco, but with a yield more than five times higher than that of its competitor, Sunoco clearly comes out on top by this metric.

Neither company's balance sheet is pristine, and that's hardly a surprise in this weak oil market. Even the largest integrated oil companies like ExxonMobil and Shell have seen their debt loads rise as oil prices wreaked havoc on their bottom lines. But the question is how well the companies are managing the debt they've had to take on.

Sunoco's dividend yield isn't the only number that's much higher than Conoco's. Its debt-to-equity ratio is nearly 1.5, compared to Conoco's 0.4. Even for an energy company, that's astronomical. Sunoco has so much debt, in fact, that S&P Global downgraded it to a BB- rating in January before its creditors finally stepped in and forced it to accept a debt reduction plan.

That plan, which only calls for the company to reduce its debt to 5.5 times its equity (down from 6.5 times equity in Q4 2016), is being augmented by a $300 million infusion of liquidity by Energy Transfer Equity, one of the other partnerships in the Energy Transfer family, and by the recent sale of 1,110 of Sunoco's convenience stores to 7-Eleven for $3.3 billion.

Management expects that this transaction will bring total debt down to about 4.5 to 4.75 times equity. That may be enough to satisfy the company's creditors, but it's still a lot of debt. Conoco's balance sheet seems downright tame by comparison.

Dividends and current debt loads only tell us about where a company is today. Of more interest to investors should be where a company is going. And right now, these companies have charted very similar paths forward: trimming the fat.

ConocoPhillips has done a pretty good job of this recently. It's begun getting out of the risky and expensive business of deepwater exploration. It's also cutting costs and has promised to trim its capital budget by 4% this year. In its Q4 earnings call, Executive Vice President Don Wallette suggested that the company's breakeven would be in the "high 40s" moving forward.

Sunoco, as I mentioned, has sold off 1,110 of its convenience stores to 7-Eleven, and it has plans to sell another 207, which would get it out of the convenience store business entirely, with the exception of a handful of high-margin Aloha Petroleum stores in Hawaii. However, it's received a 15-year, fixed-rate take-or-pay fuel supply agreement from 7-Eleven as part of the deal. The agreement includes required growth components to deliver expanding volumes in future years, and it requires current Sunoco-branded stations to retain branded Sunoco fuel offerings.

This will make 7-Eleven the company's largest wholesale fuel customer, with 29% of overall wholesale volume. It also reduces Sunoco's capital needs and simplifies its business model. But even big positive changes are still big changes and inject a certain amount of risk into the business. It's a close call, but ConocoPhillips seems to have the clearer path forward at the moment.

While Sunoco has a mouth-watering dividend and has taken some concrete steps to reduce its debt, the big changes it's making to its business and the fact that the debt is nowhere near eliminated make it a risky play at the moment. That's why ConocoPhillips, despite its smaller dividend and balance sheet problems of its own, is the better buy. However, smart investors should keep an eye on Sunoco as it transitions to a leaner business model. If Sunoco can manage the transition effectively, ConocoPhillips may not come out on top next time.