While Twitter (NYSE:TWTR) is still dwarfed by Facebook's (NASDAQ:FB) social networks, including the core Facebook app, Messenger, WhatsApp, and Instagram, Twitter notably has a key place among the world's top social networks. And a recent reacceleration in Twitter's user growth suggests the social network may still have lots of room to grow.

But exactly how many users does Twitter have? 328 million monthly active users as of last count, making Twitter the ninth largest social network in the world.

Here's a closer look at Twitter's user base.

How many users does Twitter have? Image source: Getty Images.

All in the last two years, Twitter's user growth ground to a halt, turned negative, returned to growth, and reaccelerated to a meaningful rate. 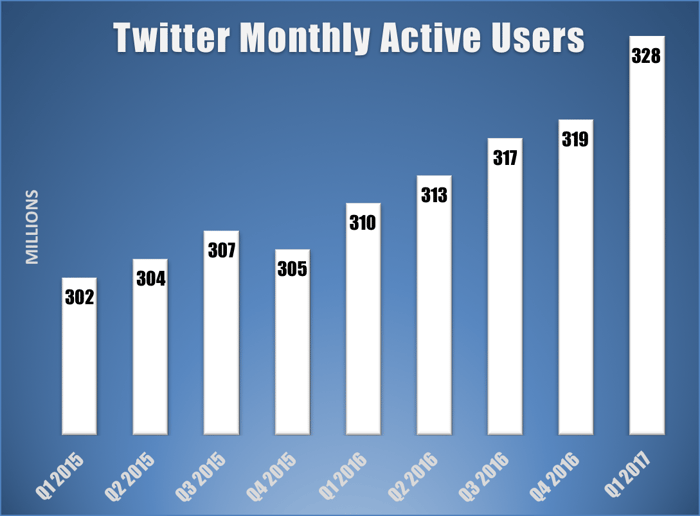 As Twitter's monthly active users stalled at just over 300 million in 2015, the stock subsequently plummeted. Between the beginning of 2015 and the end of 2016, shares fell about 55% as investors considered the implications of the company's user growth challenges.

While Twitter stock is far from recovering from its big fall, the company notably returned to fairly strong user growth in its first quarter of 2017, giving some investors hope. Monthly active users were up 6% year over year and 3% sequentially. Investors took the higher-than-expected growth as good news, sending shares up about 11% after Twitter posted the results. 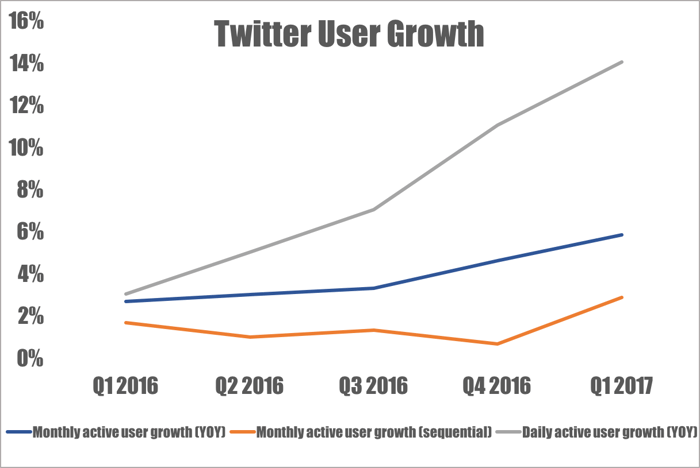 Perhaps the most notable metric for investors to turn their attention to is Twitter's sudden and steep growth in its daily active users, which management happily pointed out in the company's first-quarter earnings release. "Average daily active usage grew 14% year-over-year, an acceleration from 11% in the fourth quarter, 7% in the third quarter, 5% in the second quarter and 3% in the first quarter of 2016," Twitter said.

Though Twitter doesn't share exactly how many daily active users it has, the metric's accelerating growth is encouraging.

At least when compared to Facebook's social networks, investors should note that Twitter isn't seeing the same sort of global adoption that Facebook is. In other words, while Twitter is clearly an important social network, it hasn't become a ubiquitous app that most active smartphone users log into every month.

For some context, Facebook, which is the world's largest social network, has nearly 2 billion monthly active users. Further, Facebook's two messaging apps, WhatsApp and Messenger, have 1.2 billion users each. And Facebook's photo- and video-sharing app Instagram recently hit 700 million monthly active users. Facebook has the formula for making global, mass-market social networks down to a science, holding the top three positions in a list of the world's largest social networks, as well as seventh place.

At 328 million monthly active users, and with its user growth reaccelerating recently, Twitter is undoubtedly a force to be reckoned with. But the company is going to need to serve up more steep growth before investors start betting the service has the sort of global, mass-market appeal Facebook's social networks have been able to achieve.