Even after a steep decline over the past year, Under Armour stock is priced for something close to the best-case scenario.

Apparel and footwear company Under Armour (UA -0.54%) (UAA -0.94%) has grown at an impressive pace over the past decade, all while maintaining solid profitability. Under Armour produced $4.83 billion of revenue in 2016, up from $607 million in 2007. That's a compound annual growth rate of 23%. Net income has also surged, quintupling over the past 10 years.

The simple bull argument for Under Armour is that it's the next Nike (NKE -1.12%), a company with $33 billion of annual revenue and operating margin consistently in the low teens. Under Armour's brand has become well known, and its footwear business is experiencing gangbusters growth, expanding nearly 50% in 2016 to over $1 billion. The best-case scenario looks awfully good for Under Armour investors.

Problems with the bull argument 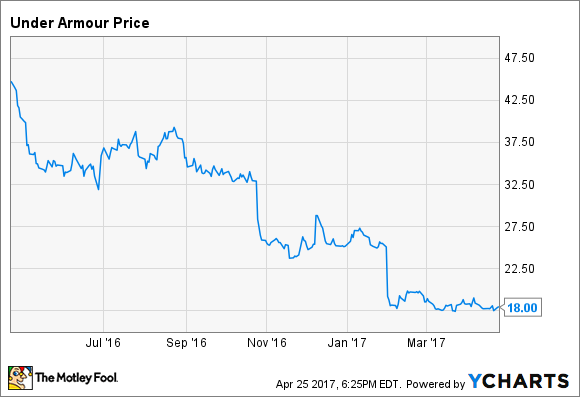 At the same time revenue growth is slowing, margin is contracting. Under Armour expects its gross margin to decline in 2017 because the international business is growing faster than the domestic business. That's on top of a 1.6 percentage-point gross-margin decline in 2016. Operating income is expected to be around $320 million this year, down nearly 24%, driven lower by strategic investments.

Under Armour grew North American sales by 16% in 2016, but operating income from the region declined by 10.8%. When revenue and profit start moving in opposite directions, investors are right to be concerned. Under Armour's operating-income guidance suggests that this trend will persist in 2017.

To be fair, every company goes through rough patches. Under Armour may emerge from this difficult period stronger than ever, and growth could reaccelerate. International markets are the company's biggest opportunity, with just $740 million of international sales in 2016. That compares with about $4 billion in North American sales.

But that's just one scenario. Under Armour is now large enough that growing sales at a double-digit pace requires it to steal significant market share from its competitors, including Nike. Competition will only get fiercer as Under Armour grows larger, and that will put downward pressure on the bottom line. Under Armour's operating margin will fall to just 6% in 2017 based on its guidance. The big question: Is this the new norm, or just a temporary setback for the company?

A high price to pay

I don't know the answer to that question. What I do know is that the market is extremely optimistic. One year ago, Under Armour sported a market capitalization of around $19 billion, a staggering 73 times 2016 net income. After the decline of the past year, that ratio has fallen to a more realistic 30. But with net income heading lower this year, the forward P/E ratio is quite a bit higher. Based on the average analyst estimate for 2017 EPS, Under Armour stock trades for about 44 times earnings.

Under the best-case scenario, where Under Armour's revenue reaccelerates and margin bounces back, this may not be an unreasonable price to pay. If Under Armour truly does grow into a Nike-caliber company over the next decade or so, paying such a high price today won't matter much.

But if Under Armour's growth never picks back up, and if the competition keeps its margin below historical levels, a P/E ratio above 40 won't last. Those bullish on Under Armour could end up being right in the long run, but by paying so much for the stock, they're ignoring the possibility that they could be wrong. Betting on the best-case scenario comes with a lot of downside if things don't work out.