The provider of advanced specialty materials crushed Wall Street's best guesses in the first quarter, followed by a high guidance bar for the next report.

Shares of specialized materials manufacturer Rogers (ROG -0.23%) jumped as much as 11.7% higher on Thursday, setting fresh 52-week and all-time highs in the process.

The company reported first-quarter results Wednesday night, exceeding Wall Street's estimates by a wide margin. Top-line sales grew 27% year over year to $204 million, leaving the analyst consensus grasping for air at $190 million. On the bottom line, adjusted earnings soared 79% higher to land at $1.68 per diluted share. Here, your average analyst would have settled for $1.15 per share. 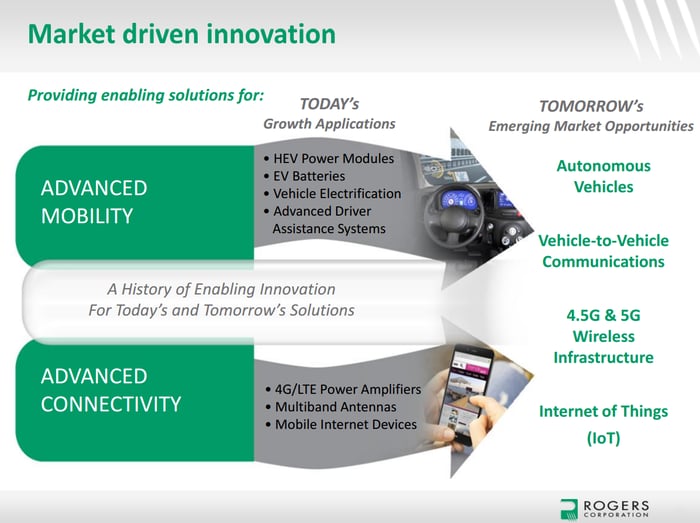 Rogers' management pinned the revenue surprise on organic growth across all business units, including an additional boost from the recently acquired DeWAL Industries and Diversified Silicone Products operations. Both sales and operating margins increased in each of Rogers' three reporting segments, compared to the year-ago quarter.

"We remain cautious regarding global markets given the ongoing geopolitical uncertainty," said Rogers CEO Bruce Hoechner in a prepared statement. That being said, the company guided to second-quarter sales of roughly $195 million with an adjusted target of approximately $1.21 per diluted share.

Both of these guidance targets sit above the high end of Wall Street's estimates. The stock has now gained 85% in six months, and Thursday's surge was honestly earned.

Why Rogers Shares Are Soaring Today

Why Rogers Stock Is Plummeting Today

Why Rogers Stock Soared on Friday