Last September, bank regulators revealed that thousands of Wells Fargo (WFC 0.86%) employees opened millions of fake accounts for customers, in some cases, causing them to accrue account and overdraft fees. One would think this would decimate Wells Fargo's customer satisfaction scores -- but just the opposite happened.

A new report by J.D. Power shows that Wells Fargo performed better across the board when it came to customer satisfaction, improving its score in all 11 of the geographic regions broken out by the survey.

On the one hand, this isn't surprising, as Wells Fargo has been claiming all along that its customer service scores have been improving.

I want to start by acknowledging the hard work and dedication of our team members throughout Wells Fargo, who are focused on putting our customers first and helping them succeed financially. This commitment has been demonstrated through our improving Retail Banking customer service scores, record client assets in wealth and investment management, including banker-closed referrals once again reaching $1 billion a month, more primary consumer checking customers and industry-leading mortgage originations during the quarter.

Yet, if you dig into Wells Fargo's own estimate of customer satisfaction, it's clear that the fake account scandal has had an impact -- albeit a small one. While the numbers are improving since the immediate aftermath of its scandal, they're still down from this time last year. 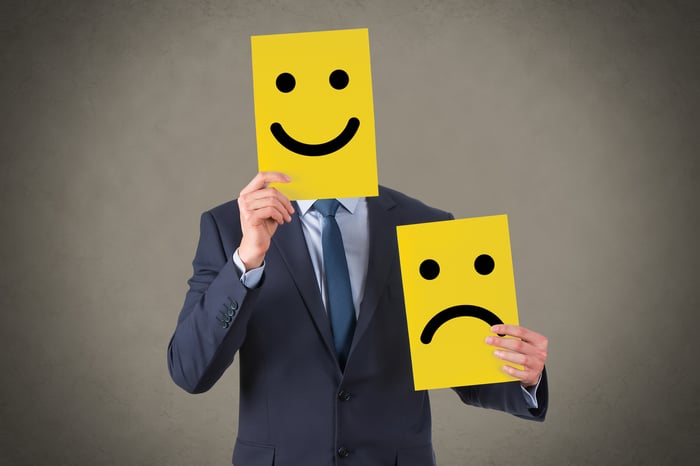 According to its analysis, Wells Fargo scored 77.6% in March in terms of customers' overall satisfaction with their most recent branch visit. This had dropped to 73.9% in October, but was 78% in August, the month before its sales scandal came to light.

So, how is it possible that J.D. Power's latest retail banking satisfaction survey showed that Wells Fargo improved its scores in all 11 regions? The answer is: All banks saw an improvement, with the average score across the regions improving by 3%. Wells Fargo, by contrast, saw its average rating grow by only 2.1%.

Even according to J.D. Power, in turn, Wells Fargo has indeed seen an impact on customer satisfaction, but instead of causing it to fall since this time last year, it's just slowed its improvement relative to other banks.