The markets brought plenty of interesting developments this week. Among them was a steel stock melting down, a retailer heading toward its inevitable demise, and a rebounding automaker.

Another trading week is in the books, with the S&P 500 and Dow Jones Industrial Average trading 1.5% and 1.9% higher, respectively. Despite the market rally, it wasn't a great week in terms of economic data, as GDP was reported to have increased a meager 0.7% during the first quarter, at a seasonally adjusted annual rate, according to the Commerce Department -- the weakest quarterly mark since early 2014. Take the report with a grain of salt, as these are always adjusted at later dates.

With that aside, let's look at some companies boasting big moves, big earnings, or big headlines this week in the markets.

It wasn't a pretty week for shares of steel manufacturer United States Steel Corporation (X 4.37%), which shed roughly a quarter of its market capitalization as its stock price imploded. Just a few months ago, the stock was on fire, in a good way, and nearly doubled from the moment Donald Trump was elected president through the middle of March. The movement higher was largely based on the hope that Trump's potential infrastructure plan would increase demand for U.S. steel. 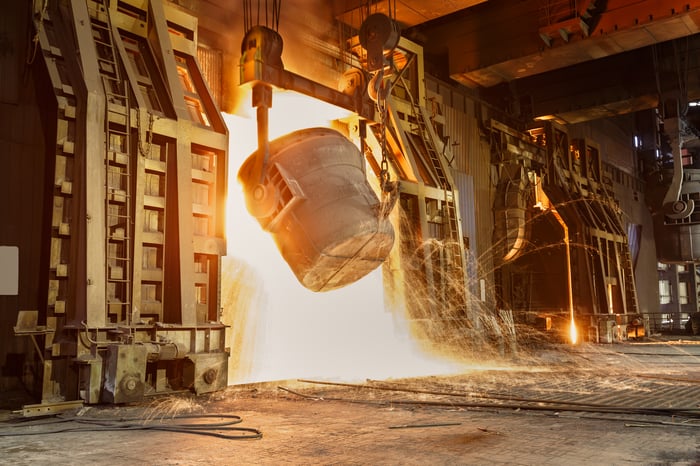 Since then it's been a consistent downhill trend, culminating in this week's implosion after the company's earnings disappointed its once hopeful investors. In terms of the financial results, revenue was up 16% during the first quarter to $2.7 billion, but despite a recent rise in metal prices, the company still posted a net loss of $180 million, or $1.03 per share.

But perhaps the real issue for investors was that it is now painfully obvious U.S. Steel is behind some of its competitors with improving its operations and cutting costs. To that point, management noted that it's upgrading its equipment and other processes that will take three to four years -- causing some investors to throw in the towel or opt for a different steel company.

Even Macquarie's once bullish analyst, Aldo Mazzaferro, had this to say, according to Barron's: "We reduce our rating to "underperform" from "neutral," and cut our target price to $18 from $30, after further assessing the damage to earnings from the planned [three- to four-year], over $1 billion asset-revitalization program to upgrade mills. Even after the sharp decline in the shares, we see further downside to $18."

Not if, but when

It seems management of the once popular and even profitable Sears Holdings (SHLDQ) is just squeezing out as much time as possible before this slow-motion train wreck finally ends. In what's become a common theme over the past year, shares of the troubled retailer plunged by double digits multiple times this week and shed almost a quarter of its value.

It all started last Friday, when Sears announced that its comparable-store sales have dropped nearly 12% since the beginning of the year. It followed that news up with another bombshell: Despite its cost cuts, its first-quarter adjusted EBITDA would check in with a $190 million loss at best, and it could be as bad as a $230 million loss. That's little to no improvement from last year's equally brutal $181 million loss during the first quarter. Keep Sears' adjusted EBITDA in mind when hearing that Sears ends up posting a positive net income during the first quarter, because that's solely due to the sale of its Craftsman business and other real estate transactions -- factors that are obviously unsustainable.

Sears' increasingly inevitable bankruptcy isn't for lack of effort by its management team that has faced a nearly impossible task to turn around an outdated business model in many crumbling mall locations with outdated stores. Despite the tall task, though, management isn't sitting idle and announced on Monday that Sears would close 50 Auto Centers and 92 Kmart pharmacies -- this is in addition to the earlier announcement of 150 store closings.

Businesses com and go, and what once was a booming retailer is now facing its inevitable demise. It seems not a matter of whether it happens, but when.

Let's end this weekly recap on a bright note from an often forgotten automaker that's also faced its fair share of doom and gloom: Fiat Chrysler Automobiles (FCAU). There are plenty of things FCA needs to work on, but one thing it does well is sell popular Jeep SUVs and full-size Ram Trucks.

Thanks in large part to those two brands, the company's net revenue checked in 4% higher during the first quarter, with its adjusted EBIT up a more impressive 11% to $1.67 billion. Those results were enough to top analysts' estimates and set a first-quarter record for Detroit's third largest automaker. Perhaps even more impressive is that it sent the company's stock up roughly 11% on Wednesday, after investors digested the information -- impressive because the stock had already rallied significantly since Donald Trump won the election.

Outside its very profitable and high-volume-selling Jeep and full-size truck products, there was another impressive development: FCA's high-end luxury Maserati brand has started gaining some serious traction on the bottom line. For context, during last year's first quarter, Maserati generated a modest 1.1% of FCA's total adjusted EBIT. This year, thanks to an 89% increase in shipments and an 820-basis-point improvement in margin, its adjusted EBIT soared 569%, from 16 million euros to 107 million euros.

FCA, which is often an afterthought with Detroit automakers, posted a strong enough quarter to warrant its recent rally and give investors hope that its Maserati brand can also help fuel a companywide turnaround.

U.S. Auto Sales Have Collapsed, but the Worst May Be in the Rear View Mirror