Please ensure Javascript is enabled for purposes of website accessibility
Log In Help Join The Motley Fool
Free Article Join Over 1 Million Premium Members And Get More In-Depth Stock Guidance and Research
By Rich Smith - Apr 29, 2017 at 8:13AM

The U.S. Navy is not a very flexible force.

Out of 275 ships on the Navy's "Battle Forces" list, fully 23% of the Navy's ships are Arleigh Burke-class "destroyers," and 25% are nuclear submarines. Throw in a few Ticonderoga-class cruisers (8% of the fleet) and 10 operational aircraft carriers (4%), and well over half the fleet is made up of just four types of warship.

Why doesn't the Navy have a more flexible toolkit, with more types of vessels designed to tackle more specific sorts of missions? In part, it's a question of cost. More ship designs mean more expense to maintain them. In addition, when the Navy has tried to introduce new ship types to the fleet, it's sometimes been shocked to find the ships arriving over budget and behind schedule. 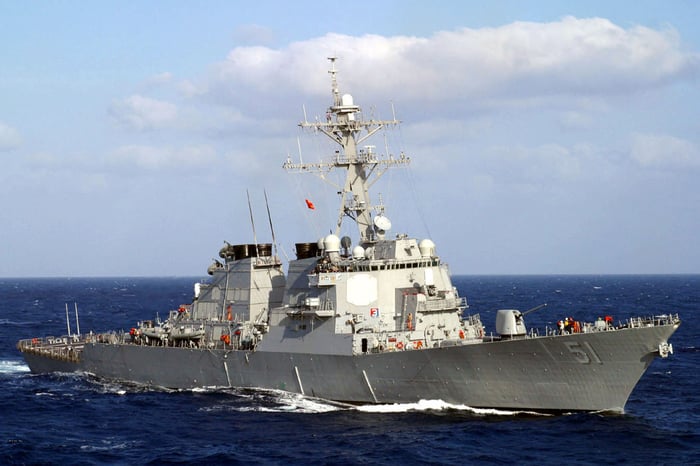 Take the Navy's new Zumwalt-class destroyer. Built cooperatively by General Dynamics (GD 0.55%) and Huntington Ingalls (HII 3.20%), with Raytheon (RTN) providing the combat system,  Zumwalt is so big as to be more akin to a cruiser than a destroyer. The Zumwalt-class was designed to become the next phase in destroyer development, and ultimately to replace the preceding Arleigh Burke­ class of destroyers (also produced by General Dynamics, Huntington Ingalls, and Raytheon). Built with a "stealthy" silhouette, it's designed to have a radar signature no bigger than a fishing boat, making it difficult to detect and difficult for hostile missiles to lock onto.

Zumwalt was also designed with an eye toward installing futuristic, 21st-century weapons systems aboard it -- low-cost electromagnetic railguns and laser cannons that possess incredible range and accuracy but also require a lot of energy to operate. To feed these weapons' insatiable appetite for electricity, Zumwalt is equipped with two powerful Rolls-Royce (RYCEY 2.88%) MT30 gas turbines that put out 35.4 MW of electricity each and are supplemented with two more Rolls-Royce turbine generators producing an additional 3.8 MW each -- a combined 78.4 MW of power.

But here's the problem: The Navy initially expected to build 32 Zumwalt-class units. Cost overruns eventually forced the Navy to cut its planned acquisitions to 24 ships, then to 16, seven, and finally just three vessels -- resulting in a unit production cost of nearly $4 billion per Zumwalt, and a total cost for the program of $7.7 billion per ship, including research and development costs.

Faced with this price tag, the Navy blanched and quickly rejiggered its plans, to build fewer Zumwalts and more Arleigh Burkes instead. Of course, at a unit cost of $1.8 billion per ship, or $2 billion including R&D costs, the Arleigh Burke-class destroyers aren't exactly cheap, either.

In doing so, though, the Navy ran into another problem. First, adding the 22 planned new "Flight III" Arleigh Burkes to the ship roster, plus 11 more  Flight IIAs still under construction, will make the Navy more reliant than ever on this single class of ship. And second, as a recent report to Congress from the Congressional Research Service (CRS) explains, the Arleigh Burke-class is entirely incapable of fulfilling the Navy's objective to create "large numbers of ships with integrated electric drive systems ... that could provide ample electrical power for supporting future electrically powered weapons" such as railguns and lasers.

Or in other words, building more Arleigh Burkes will make the Navy increasingly reliant on a weapons system that plainly fails to meet its needs.

CRS's latest report to Congress makes clear that something must be done if the Navy wants its 21st-century fleet to be capable of powering and using the 21st-century weapons now coming online. One option, says CRS, might be "to further modify the [Arleigh Burke] design," adding "an integrated electric drive system or other technologies that could provide ample electrical power for supporting future electrically powered weapons." Another option would be "to initiate a program to design a new cruiser or destroyer class."

Granted, there's also the third option of reinflating the Zumwalt program to produce more than just three warships. By spreading the program's $10.8 billion in R&D costs, already incurred, across a larger fleet, the Navy would be able to bring the total cost per ship down significantly. But even in the best-case scenario, it would not be able to reduce costs below the production cost, ex-R&D, of $4 billion per ship -- and that's already twice as expensive per ship as an Arleigh Burke destroyer including R&D.

So what's the solution, and what does it mean for investors? Here's my read on the situation.

At present, the president appears to have given the Navy a mandate to build a 350-ship navy. He'll want to see progress toward that goal during his term(s) in office. But spending years, or decades, designing but not building a new class of warship would defeat that goal. For the time being, therefore, I expect the Navy will follow its momentum and continue building Arleigh Burke destroyers just as fast as it can, even though they won't meet its long-term goal of supporting advanced weapons systems such as railguns and lasers.

Longer-term, though, I could see the Navy simultaneously sponsoring a new program to develop a more powerful (in terms of electricity) small surface combatant to finally replace the Arleigh Burke-class, and perhaps even a larger warship to replace its fleet of aging Ticonderoga-class cruisers. We probably wouldn't see any actual ships come out of such programs for a decade or more. But the Navy really can't afford to wait much longer to address this problem.

Ultimately, that means more money flowing to General Dynamics, Huntington Ingalls, and Raytheon in both the near and long terms. And that's why I think the naval contracting stocks remain a great place for folks interested in the defense sector to invest their money.