Please ensure Javascript is enabled for purposes of website accessibility
Log In Help Join The Motley Fool
Free Article Join Over 1 Million Premium Members And Get More In-Depth Stock Guidance and Research
By Keith Speights - Apr 30, 2017 at 10:41AM

April showers bring May flowers. And as every grade-schooler knows, Mayflowers bring Pilgrims. 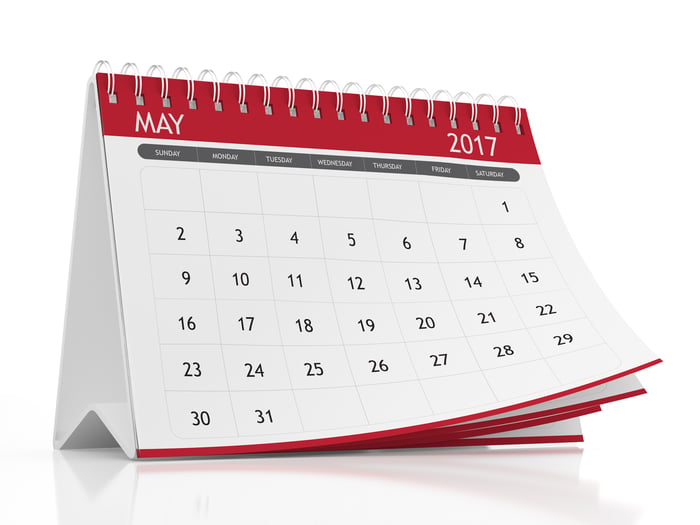 Merck: Two decisions on the way

Merck anticipates two approval decisions by the U.S. Food and Drug Administration (FDA) in May. The more important is for Keytruda. An FDA decision on approval of the drug in combination with chemotherapy as a first-line treatment for non-squamous non-small cell lung cancer (NSCLC) is expected by May 10.

Keytruda already won approval as a monotherapy for first-line treatment of NSCLC. However, many observers think that combination treatments could hold even greater potential for battling the disease.

The pharmaceutical company also awaits an FDA decision for Isentress in combination with other antiretroviral therapies for the treatment of HIV-1 infection. That decision is expected by May 27. Isentress first won approval for treating HIV in 2007.

On Nov. 14, 2016, the FDA granted priority review to Novartis' PKC412 (midostaurin) in treating rare diseases acute myeloid leukemia (AML) and advanced systemic mastocytosis. That means an approval decision should be announced by May 14.

PKC412 targets treatment of adult AML patients with an FMS-like tyrosine kinase-3 (FLT3) mutation. This mutation occurs in around one-third of patients. Novartis collaborated with Invivoscribe Technologies to develop a companion diagnostic test to identify patients with the FLT3 mutation. A premarket approval application (PMA) for this companion diagnostic was also accepted for review by the FDA.

If approved, PKC412 could be a game changer for both targeted indications, but particularly for AML. Treatment approaches for AML haven't changed dramatically for years. Novartis' drug could be the first FLT3-mutated AML therapy to demonstrate a survival benefit.

Novo Nordisk already claims three hemophilia drugs on the market. The Danish drugmaker would like to make that number go up to four soon. The company expects an FDA decision on experimental hemophilia B drug nonacog beta pegol by May 16. The FDA's blood products advisory committee already met on April 4 to review the drug.

Efficacy shouldn't be an issue. Novo Nordisk's pivotal clinical studies involving 115 patients with severe or moderately severe hemophilia B found significant reduction in bleeding and sustained maintenance of factor IX, the clotting protein which is missing or defective in hemophilia B patients.

The primary hurdle Novo Nordisk has is the safety of nonacog beta pegol. The FDA advisory committee noted two concerns. One was related to whether the monitoring of neurologic function in Novo Nordisk's clinical studies was adequate to detect all clinically important neurologic signs or symptoms. The other was a question about whether the number of patients involved in the studies was sufficient to evaluate the safety of the drug.

Regeneron and Sanofi: The second time could be the charm

Regeneron and Sanofi got turned down by the FDA on their initial attempt to win approval for Kevzara (sarilumab) in treating rheumatoid arthritis. The agency pointed to manufacturing issues at the Sanofi facility where the drug was made as the reason for its rejection.

The two partners hope that the second time will prove to be the charm. Regeneron and Sanofi recently announced the FDA had accepted the resubmission of the Biologics License Application (BLA) for Kevzara. An approval decision is expected by May 22.

If approved, Kevzara would add to the growing list of drugs in which Regeneron and Sanofi have partnered. The two companies already market cholesterol drug Praluent and recently won regulatory approval for atopic dermatitis drug Dupixent.

I suspect that the biggest impact of these looming FDA decisions will be the one for Kevzara. Analysts expect the drug to reach sales of $1.8 billion by 2020, if approved. A positive decision would help both Regeneron and Sanofi, but Regeneron's share price would likely benefit the most.