President Trump's much-anticipated tax plan is now on the table -- or at least a lot of it is. Treasury Secretary Steven Mnuchin laid out the primary components of the tax proposal on Wednesday. 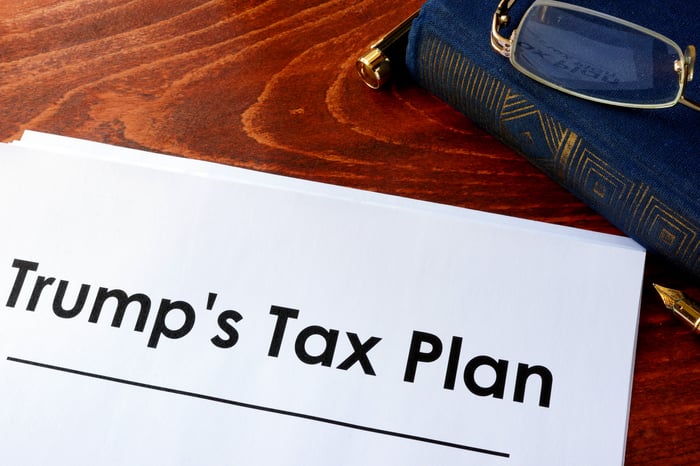 President Trump wants to cut the corporate tax rate from 35% to 15% to make the U.S. more competitive with other countries. This huge reduction won't impact Johnson & Johnson as much as you might think, though. J&J's effective tax rate in 2016 was only 16.5%.

How did Johnson & Johnson manage to pull off a relatively low effective tax rate? The healthcare giant made most of its money outside of the U.S., where corporate tax rates are lower. Last year, J&J's U.S. pre-tax earnings totaled $7.5 billion, while its international pre-tax earnings were $12.3 billion.

However, going from a 35% tax rate to a 15% tax rate is still a big deal for Johnson & Johnson. If we used J&J's 2016 U.S. earnings figure, the lower rate would have allowed the company to keep an additional $1.5 billion.

The Trump administration also proposed a one-time discounted tax on repatriation of money parked overseas, but didn't provide specifics on what the rate would be. President Trump discussed a 10% one-time rate during the presidential campaign.

At the beginning of the year, Johnson & Johnson held $41.3 billion in cash and short-term investments. That amount will be reduced significantly assuming J&J's all-cash $30 billion buyout of Actelion goes through as expected. A one-time discount, though, would still allow the company to bring quite a bit of money back into the U.S. at a low rate.

Roughly half of Pfizer's sales last year were made in the U.S. If we assume that proportion could be applied to pre-tax earnings, that means Pfizer's U.S. profits in 2016 were around $4 billion. (That's probably on the low end, since drugmakers tend to make higher profits in the U.S. than in other countries.)

Using that amount, though, would mean that the Trump tax plan would allow Pfizer to keep an additional $800 million per year. It wouldn't take very long for the company to accumulate billions of dollars that it could use to perhaps invest in research or return to shareholders through higher dividends.

Pfizer had nearly $18 billion in cash, cash equivalents, and short-term investments at the end of 2016. The company typically keeps around $10 billion in the U.S. with the rest held overseas. A discounted tax rate for repatriating the roughly $8 billion that is in international accounts could be an added bonus for Pfizer and its shareholders.

Around 64% of Gilead's sales last year were made in the U.S. If we applied that percentage to the company's net income, that would translate to U.S. pre-tax income of $10.9 billion. Had the White House tax plan been in effect, Gilead would have saved in the ballpark of $2 billion in federal taxes.

However, the impact of President Trump's tax proposal if enacted won't provide that big of a boost to Gilead. That's because the company expects lower revenue and earnings in 2017 due to declining hepatitis C drug sales. Still, it's probably realistic to estimate that the Trump tax plan will add billions of dollars to Gilead's coffers.

Gilead could be especially helped by the one-time low tax rate for repatriation. The biotech had $32.4 billion in cash, cash equivalents, and marketable securities as of the end of 2016. Around $27.4 billion of that amount is held in overseas accounts.

The Trump tax proposal could be great for Johnson & Johnson, Pfizer, and Gilead Sciences shareholders. Remember, however, that there are a lot of details to be worked out. The figures mentioned above are back-of-the-napkin kinds of calculations. Actual tax benefits are sure to be more complicated to determine.

More important, it's just a proposal for now. There's a long way to go before any changes becomes law, if it happens at all. And even if a tax reform bill passes Congress, it could (and probably will) look quite different from the tax plan laid out by Steven Mnuchin. But for these three drugmakers, anything remotely close to the Trump tax plan would be tremendously beneficial.