Please ensure Javascript is enabled for purposes of website accessibility
Log In Help Join The Motley Fool
Free Article
Join Nearly 1 Million Premium Members And Get More In-Depth Stock Guidance and Research
By Tyler Crowe – May 1, 2017 at 10:37AM

There hasn't been much relief for rig companies lately, but Ensco is making the best of it.

If there is any group of companies in oil and gas that need to take the "lower for longer" mantra to heart, it's offshore rig companies. Oil is still relatively cheap at $50 a barrel, but it's expensive enough that other oil sources ahead of offshore production at the feeding trough can start to ramp up production. That means offshore activity has yet to see the bottom, and it showed in Ensco's (VAL) most recent earnings report.

Ensco has had to deal with the same challenging environment as the rest of the industry, but it so far has been one of the companies to handle it better. Here's a look at the company's most recent results and why it has been able to fare slightly better than the rest lately. 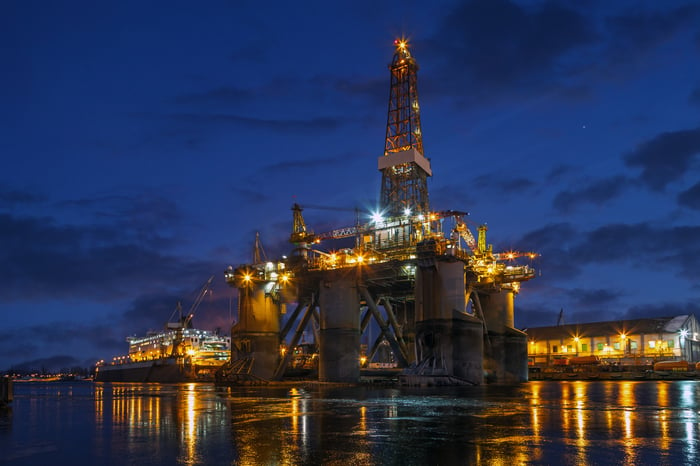 For the past couple years, Ensco and a few other offshore rig companies have been able to maintain decent earnings results in the face of declining revenue. Much of that was achieved by drastically reducing capital spending and wringing every available dollar out of operational costs.

It would appear, though, that all that could be squeezed from operations has come out, because operational costs are no longer keeping pace with revenue declines. As a result of rigs coming off contract and no follow-up work, rig utilization fell to 58% in the quarter. Those losses are hitting the company's floating fleet especially hard, though, as utilization for floaters is down to just 47%. Furthermore, the average day rate for the fleet fell to $156,000 -- $336,600 for floaters and $86,400 for jack-ups.

The one saving grace for this particular quarter is that Ensco continues to run these rigs efficiently; the fleet reported an operational utilization rate of 99%. That means the company isn't incurring unnecessary costs for downtime when a rig is out on a job.

As far as Ensco's balance sheet, things aren't getting better, nor are they getting worse. The company still has $2.1 billion in cash and short-term investments on which it can lean through these tough times. It just repurchased $336 million in outstanding notes, which leaves it with total long-term debt of $4.9 billion.

If there was any sign of hope to glean from Ensco lately, it's that the company has been able to secure a decent amount of short-term work for its fleet of rigs still working. According to its most recent fleet status update, customers signed up to either extend their existing contracts or take possession of a rig once its existing contract expires, for a total of eight rigs. With the exception of one four-year extension for a jack-up in the North Sea, all of these contracts are for a few wells.

Getting these shorter-contract rigs isn't necessarily a bad thing. Contract rates are so low right now that it's probably better for rig companies to sign short-term work until there is enough offshore activity to bring rigs back online and bump day rates.

CEO Carl Trowell commented on the company's most recent results and what Ensco's management is seeing from customers right now:

While market conditions remain challenging, we recently won several contracts and extensions including a four-year extension for jackup ENSCO 92 in the North Sea. This contracting success demonstrates our ability to leverage a proven operating and safety track record as well as a strong financial position to differentiate Ensco as the offshore driller of choice among customers.

As customer activity increases, we will continue targeting contracts with strategic clients in key growth markets to further improve utilization for our rig fleet. We are well positioned to capitalize on these new contracting opportunities by virtue of our financial strength, diverse rig fleet and global footprint.

To have so few of Ensco's rigs working and for the company to just barely fall into the loss column seems like a small victory in and of itself. Unfortunately for investors, we're still probably at least a couple quarters away before we start to see activity pick up in earnest again. So don't be surprised if Ensco continues to post losses for the foreseeable future.

That said, Ensco is in a better position than a decent chunk of its peers. That large cash hoard will help the company work through the rest of the year and it won't be completely financially compromised when offshore drilling activity hits its stride again.