Please ensure Javascript is enabled for purposes of website accessibility
Log In Help Join The Motley Fool
Free Article Join Over 1 Million Premium Members And Get More In-Depth Stock Guidance and Research
By Rich Smith – Updated May 1, 2017 at 1:01PM

First Solar is getting some help from a bankrupt rival.

First Solar (FSLR 1.02%) stock is up 8% over the past week -- and no, not because First Solar reported earnings. Fact is, First Solar isn't expected to report earnings until tomorrow. But that hasn't prevented three of Wall Street's best and brightest from upgrading the shares before the news is out. 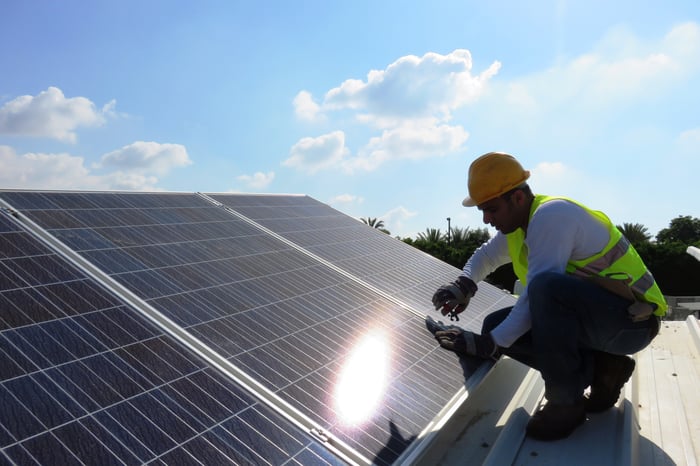 1. This is not a story about First Solar

This story actually centers not on First Solar per se, but on one of its rivals -- which may be acting to its benefit.

As my Foolish colleague Travis Hoium explains, last week, a small Atlanta manufacturer of solar cells and solar modules named Suniva filed a complaint under Section 201 of the Trade Act of 1974, petitioning the U.S. International Trade Commission (ITC) to impose temporary tariffs on Chinese-manufactured solar cells and modules, alleging that they are being sold into the U.S. at below-market prices. Suniva wants the president to raise tariffs sufficiently to ensure that imported solar panels cost at least $0.78 per watt, and that imported solar cells cost at least $0.40 per watt -- which Travis notes is about twice the current market cost of such equipment.

2. Except that it kind of is about First Solar

Now, Suniva has already filed for bankruptcy, so it's hard to see how this petition would help save Suniva's business at this point -- but the imposition of high tariffs such as it has requested might do great things for First Solar.

JMP Securities -- the first of the Wall Street bankers to upgrade First Solar last week -- notes that Suniva's petition could be "materially positive" for First Solar if it results in price hikes for imported solar panels that make First Solar's products more price competitive. Although 75% of First Solar's own panels are manufactured in Malaysia and must be imported, the TheFly.com reports that JMP "assumes that First Solar would be able to move product into the U.S." without paying tariffs imposed on China.

This assumption is enough to convince JMP that it's too risky to continue shorting First Solar stock while Suniva's petition is under review (i.e., for the next 120 days). Accordingly, JMP has upgraded First Solar to market perform for the time being.

3. Everybody aboard the train

JMP was the first analyst to come to this conclusion, but not the last. Since JMP's note appeared, analysts at Roth Capital have also upgraded First Solar shares (to buy, with a $40 price target). Roth says it sees better than a "50% probability" that Suniva's petition will be granted -- and that First Solar will benefit from it.

Then, this morning, Swiss investment banker Credit Suisse clambered aboard the First Solar train as well, announcing an upgrade from underperform to neutral, and raising its price target to $31 per share. In addition to the benefits to First Solar's business, Credit Suisse points out that 23% of First Solar stock is currently sold short.

Whether or not Suniva's Section 201 petition is granted, and whether or not this ultimately redounds to First Solar's benefit, there's now a risk that if investors even begin betting on this possibility, it could quickly drive First Solar shares higher. This could happen, for example, if the shares begin moving higher (as they are today), and this movement spooks short-sellers into covering their bets against the stock -- spooking even more shorts into covering, and thus driving the stock higher and higher.

As JMP puts it, the simple possibility of this scenario occurring means it "is not wise" to remain short First Solar while this issue is up in the air.

I agree. Given the high short interest in First Solar, and the potential for significant losses should the market begin stampeding this stock higher in a panic over higher tariffs, shorting First Solar right now probably is too risky for individual investors. But that doesn't mean you should buy the stock, either. Here's why not:

Several boom years in the solar utility business helped lift First Solar briefly into positive profits territory, but lately, that boom has faded. Data from S&P Global Market Intelligence confirm that First Solar fell back into negative GAAP profits last year, and that the company has been burning cash for the past two years. Most analysts who follow the stock expect First Solar to continue losing money and burning cash this year as well (at least absent government intervention).

Now, there is a possibility that imposition of tariffs by the ITC may be a short-term benefit to First Solar. But what that really tells me is that this company isn't capable of earning profits without intervention by and assistance from the government -- assistance that could be taken away just as easily as it can be given.

Simply put, a business that can't stand on its own, and depends on the kindness of government for its profitability, is not one I want to own. That's why, although I wouldn't short First Solar stock today, neither would I buy it.