Please ensure Javascript is enabled for purposes of website accessibility
Log In Help Join The Motley Fool
Free Article Join Over 1 Million Premium Members And Get More In-Depth Stock Guidance and Research
By John Rosevear - Updated May 3, 2017 at 12:57PM

Ford is holding back on discounts as the market slips. That cost it some sales in April.

Ford Motor Company (F -2.72%) said that its U.S. sales fell 7.2% in April from a year ago, as a modest bump in SUV sales wasn't enough to offset a significant decline in sales of Ford's car models. 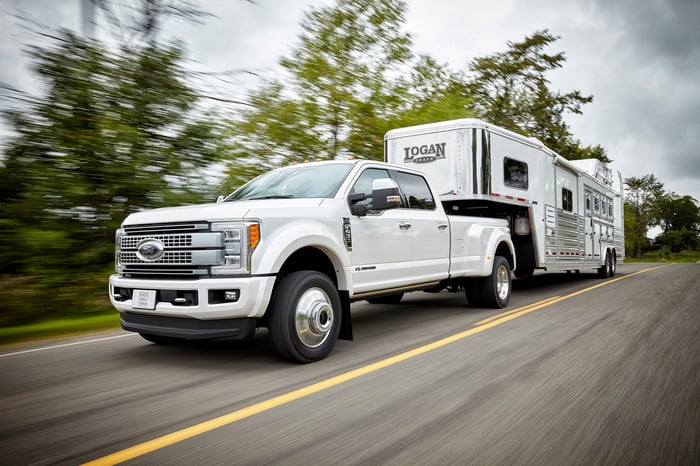 How Ford is responding to a softening market

It's not a surprise that Ford's sales were down in April. Analysts at Edmunds had projected a 4% drop for the overall U.S. market from a year ago, roughly in line with other estimates. Signs strongly indicate that the market is likely past its cyclical peak, and when all the results are tallied, new-car sales in April may trail those estimates.

Ford wasn't alone in posting a year-over-year decline. Not all automakers had released April results at press time, but among the ones that had, there wasn't any growth to show.

At this point in the cycle, we should expect to see big swings in results from month to month, with incentives rising (and inventories swelling) as automakers look for ways to find growth in a market with fewer buyers. When that happens, some automakers will get aggressive with incentives, winning sales at the expense of those automakers who choose to hold off on boosting incentives in order to protect profitability.

That has been happening, and Ford has been taking the latter approach. The Blue Oval has been careful with incentives, and its pricing remained quite strong in April. Its average transaction price (ATP), which is net of incentives, was up about $1,900 last month, according to J.D. Power data, versus an industrywide increase of just $210.

For Ford shareholders, that's good: We like to see Ford prioritizing profits over sales totals. The trade-off is that Ford's sales declined more than most rivals' as buyers chasing the best deals shopped elsewhere. But at Ford and elsewhere, more of those buyers are choosing SUVs, which is helping pricing (and profits) across the industry.

"While new-vehicle sales appear to be on the decline, most manufacturers are seeing higher retail transaction prices, with the industry average on new-car prices up for the month by nearly 2 percent," said Tim Fleming, analyst for Kelley Blue Book. "These increases appear to be primarily driven by the shift in demand toward SUVs."

Simply put, sales trends at Ford are following trends across the industry:

Ford's average transaction prices are up in part because it's selling a more profitable "mix" of vehicles than it did a year ago: Generally speaking, SUVs and Lincolns are more profitable than Ford sedans. April sales of Ford-brand SUVs as a group were up 2.8% from a year ago, with good growth for the Escape, Edge, and Expedition.

While sales of Lincolns fell about 1%, sales of Lincoln's sedan models rose 32% on what Ford executives said was strong retail demand for the big Continental, which was new last fall. 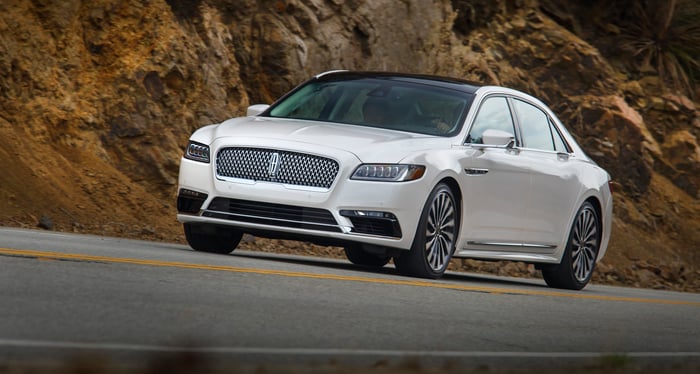 The new-for-2017 Lincoln Continental is outselling its predecessor, the MKS, by a very big margin. Image source: Ford Motor Company.

Sales of Ford's F-Series trucks were roughly flat, though at a very high level (over 70,000). But there are good trends in the year-over-year comparison. Ford's all-new Super Duty pickups are selling very well, particularly in the most profitable higher-trim lines. The Super Duty's ATP was up a whopping $8,400 from a year ago (to $58,200) in April.

Ford's F-150, which was new for 2015, also continues to sell well and at good prices. The F-150's ATP was $41,950 in April, up about $1,600 from a year ago. As usual, Ford's big pickups outsold those from rivals Fiat Chrysler Automobiles and General Motors, as FCA and GM are locked in a fierce battle for second place.

But Ford's car models are hurting: Sales were down almost 24% in April. Ford actually reduced its incentives on the Focus and Fusion, which compete in very price-sensitive market segments.

Ford's leadership continues to play its cards very well, but its hands are getting less favorable as the sales cycle goes on. The Blue Oval is prioritizing profitability over sales totals, the right approach from a shareholder's perspective -- but as the sales totals continue to fall, the profits will too.

That said, the trend toward SUVs (and Ford's pickups) should protect the Blue Oval's good profit margins for a while longer. Ford's profit dropped on increased costs in the first quarter, but the automaker expects its profit for the remainder of 2017 to roughly track the last three quarters of 2016, which was a very strong year.

That profit will depend heavily on good results in North America, particularly in the U.S. At this point, one-third of the way into the second quarter of 2017, signs suggest that Ford is on track to deliver on its guidance.