Healthcare real estate investment trust HCP, Inc. (NYSE:PEAK) just announced a solid first quarter, with good earnings and revenue growth. In addition, HCP's post-spinoff plans seem to be on track, as the company made significant progress toward its year-end balance sheet goals, and reaffirmed its full-year guidance. Here's a rundown of the results, and what to watch for the rest of the year.

For the first quarter, HCP reported adjusted funds from operations (FFO, the REIT equivalent of "earnings") of $0.51 per share, just ahead of analysts' expectations of $0.48. This was about 6% higher than comparable (excluding the spun-off assets) FFO a year ago. 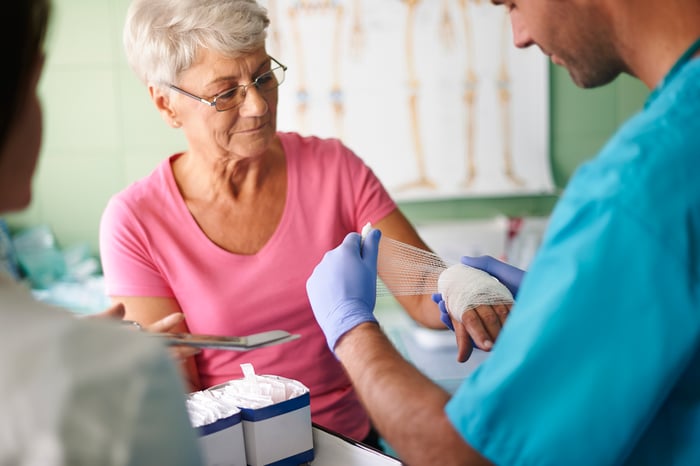 The company also stated that it is still on track to meet its core FFO guidance range of $1.89-$1.95 for 2017. Given the better-than-expected first-quarter figure, I wouldn't be surprised to see this range adjusted slightly upward in the coming quarters.

Perhaps the most significant news in HCP's first-quarter report was the completion of planned asset dispositions, which are a crucial step in reaching the ambitious balance sheet targets HCP set for itself in the wake of the QCP spinoff. If you're not familiar with these, or need to refresh your memory, here's what HCP aims to achieve:

During the first quarter, HCP completed the following asset dispositions:

In addition, HCP continues to market 25 additional Brookdale-leased properties for sale, and expects to sell them by the end of the year.

The overall result of these transactions was the repayment of $1.1 billion in debt, which puts HCP on track to achieve 43%-44% in financial leverage by the end of 2017. In addition, the company has no major debt maturities for the next two years.

What to watch for the rest of the year

HCP is making excellent progress toward its goal of becoming a rock-solid REIT full of private-pay healthcare assets with one of the strongest balance sheets in the business.

So, for the rest of the year, aside from keeping track of whether HCP continues to show solid FFO growth or not, keep the balance-sheet goals in the table in mind. Continued progress toward these goals is perhaps the top thing to watch for the rest of 2017.

Also, since HCP had to cut its dividend for the first time in more than 25 years upon the spin-off of QCP, shareholders will likely be anxious to see if dividend increases resume this year. Any announcement of a dividend increase (likely to come toward the end of the year) would undoubtedly cause investors to breathe a sigh of relief.