Think the growth is done? Think again. This company has three key traits that could carry it to a trillion-dollar valuation.

No one in their right mind would ever put all of their eggs in one basket. But if forced to, I have no doubt about the company I would choose: Amazon.com (AMZN 2.14%).

I've felt this way for a long time: Back in May 2012, I called it "my highest conviction stock in the market." Since then, shares are up over 350% -- versus the S&P 500's return of just 76%. But I'm still confident in shares moving forward, which helps explain why I'm comfortable allowing the company to occupy 20% of my real-life holdings. 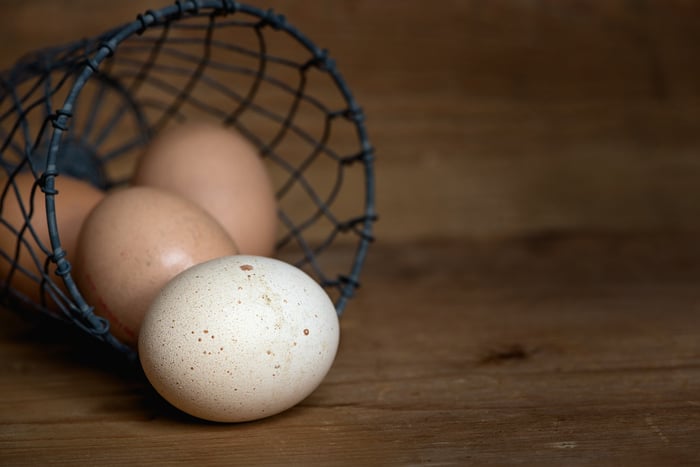 Relax, I'm not really putting all of my eggs into one basket. Image source: Pixabay.

That's because Amazon has the three most important things I look for in any investment: an effective barbell approach, skin in the game, and financial fortitude. As an aside, many of the ideas I'll be using for this evaluation come from Nassim Taleb's best-seller Antifragile, which I highly suggest to investors and non-investors alike.

A barbell approach is one in which a company has a strong and stable core business, but allows for small, risky, high-reward experiments that never have the potential to cause permanent damage if they don't work out.

Amazon is the poster child for this method. It started in books, moved to e-readers, then general merchandise, and now creates original content for Amazon Prime viewers and is a cloud-hosting giant.

The key to understanding the thread that weaves this all together is the company's mission statement from the get-go: "to be the earth's most customer-centric company."

Let's investigate how that approach plays out in the real world. The strong and stable core business is e-commerce in North America. The company has routinely increased its sales of media, electronics, and other merchandise in this category. At the same time, however, it has been willing to experiment on the risky side with bets that have ended up being quite lucrative. Management doesn't break everything out for us to see, but look at how international expansion and Amazon Web Services (AWS) have increased contributions from the "risky" side, while North American e-commerce has continued to produce.

I don't know how many possible futures Amazon might pursue, but I know one thing: there are still tons of industries ripe for disruption because their customer service is poor. As CEO Jeff Bezos recently put it, "it's always Day 1 at Amazon" -- and I have no doubt the company will make moves into those areas.

As an investor, I want to know that the employees and managers that actually do the work are motivated by success, and have reason to avoid failure. While everyone can talk a good game, it's something different to have one's skin in the game.

With Amazon, management is clearly aligned with long-term shareholders. Founder and CEO Jeff Bezos owns 16.9% of shares outstanding, with a total value of somewhere in the ballpark of $75 billion.

But it doesn't stop with Bezos. I also want to see that he has created a workplace where employees are happy to do their jobs. According to Glassdoor, Amazon -- while not tops in the industry -- is doing just fine.

Given this, I'm confident that those at the company have skin in the game, and are motivated enough to be nimble and grab opportunities that arise for improving customer service throughout the world.

Finally, though Bezos is famous for playing the long-game -- investing billions today for the hopes of even more profit tomorrow -- I am comforted by the company's balance sheet.

The bottom line, as far as I'm concerned, is that the company is healthy. If an economic downturn occurred tomorrow, Amazon would not only survive, but it would likely be able to capture more and more market share from rivals by pricing them down to the point where they would have to capitulate.

Combine these three things -- an effective barbell approach, management with skin in the game, and financial fortitude -- and I think you have a recipe for a company that could very well be one of the first to ever be valued at $1 trillion.