Please ensure Javascript is enabled for purposes of website accessibility
Log In Help Join The Motley Fool
Free Article
Join Nearly 1 Million Premium Members And Get More In-Depth Stock Guidance and Research
By Jeremy Bowman – May 2, 2017 at 7:32AM

The struggling department store chain fell on general negativity in the retail industry.

Shares of J.C. Penney (JCPN.Q) tumbled last month as the malaise in the retail sector continued to batter the department store chain. Though Penney itself did not have any significant bad news to report, shorts piled into the stock as predictions for the company and the sector continue to go south.

According to data from S&P Global Market Intelligence, the stock fell 12.7% last month. 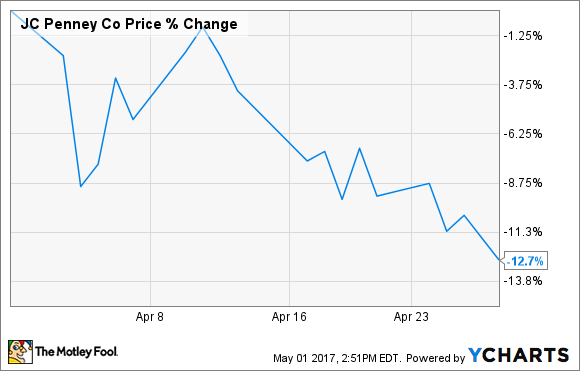 Penney shares had their worst day of the month on April 4 as the stock fell 7%. Though there was no news out on J.C. Penney that day, the stock responded to downbeat monthly sales reports and analyst downgrades as the broader retail sector sold off.

Penney has been a volatile stock since its sales plummeted in 2012 under former CEO Ron Johnson. The company has battled to return to profitability following his ouster, but even after turning a narrow profit last year, it's considered more vulnerable than peers like Macy's, Kohl's, and Nordstrom, especially after it said in February that it would close 138 stores.

The stock briefly recouped the losses from April 4 after the retailer said it was rebranding more of its salons, and announced that it would delay those store closings due to positive sales trends at the locations. That was not enough, however, to overcome the negativity that weighted on both the stock and the sector; shares fell steadily through the second half of the month in spite of Penney's announcement that it would add new Sephora stores-within-stores at 70 locations.

Investors seemed rattled by weakness in J.C. Penney's sales trajectory as the company came up short on two key promises. Management had projected comparable sales growth of 3% to 4% last year, and CEO Marvin Ellison said the company wouldn't shutter any more stores. Instead, comparable sales were flat for 2016, and the company said in February that it would close more than a hundred stores.

Analysts are expecting full-year earnings per share of $0.47 this year, which would bring Penney's valuation in line with its peers. This month's earnings report will go a long way toward showing if the company can get there, and if it can return to sales growth.

AMC, J.C. Penney, and Norwegian Cruise Lines: One of These Is a Screaming Buy
413%