Positive revenue and profit growth for Nasdaq Inc. (NDAQ -0.03%) in the first quarter of 2017 was somewhat dampened by weaker transaction volume in the company's trading markets. Nasdaq's earnings report, released on April 26, demonstrates that trading volume still plays a significant role in the exchange operator's financial model. But it also reveals the effectiveness of Nasdaq's recent efforts to diversify its revenue streams. We'll dive into the quarter's details after a run through key earnings metrics below. 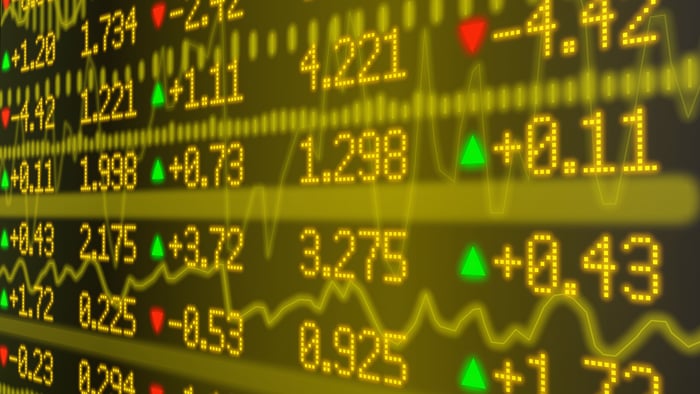 While Nasdaq has utilized bolt-on acquisitions to remain competitive with other exchanges and financial service providers, it appears to be broadening its approach.

A week before earnings, the company announced the launch of a new quasi venture capital arm, Nasdaq Ventures, which will partner with and invest in emerging financial technology (fintech) companies.

During Nasdaq's earnings conference call on April 26, CEO Adena Friedman provided some color on the purpose of the new fund: "A key focus for me is not only to the new technologies themselves, but how we can better apply them to accelerate our pipeline of new commercially viable products that add greater value to our clients. ... [W]e see Nasdaq Ventures as an avenue for us to discover, partner and invest in emerging companies in the fintech space that are developing and leveraging groundbreaking technologies that align to our clients' needs, including, but not limited to, machine intelligence, blockchain, and the cloud."

Potentially, Nasdaq Ventures will make the overall entity's future acquisitions much more efficient. By taking minority stakes in fintech start-ups early on, Nasdaq will be able to guide the development of services which directly benefit its own client base. And it can be more selective in choosing which companies to eventually buy outright.

The first three months of 2017 validated Nasdaq's buying spree over the last several business quarters. In a weak trading quarter, the company was still able to post a 9% gain in revenue.

Nasdaq has for some time wanted to decrease its reliance on trading revenue, as transaction activity within cash, derivatives, equity, and commodity markets can be quite cyclical. The expanding NFX platform provides evidence that trading remains a revenue priority. But Friedman's comments above indicate that Nasdaq will continue to diversify its business model in 2017, and likely for a few years to follow, as well.

Technology Investments Bear Fruit for Nasdaq in the Third Quarter
420%