Please ensure Javascript is enabled for purposes of website accessibility
Log In Help Join The Motley Fool
Free Article Join Over 1 Million Premium Members And Get More In-Depth Stock Guidance and Research
By Maxx Chatsko – Updated May 3, 2017 at 3:56PM

Shares of global agribusiness leader Bunge Ltd (BG 0.35%) dropped as much as 12% today after the company announced first-quarter 2017 financial results that were sharply impacted by delayed farmer selling in South America. Management expects that to shift results to later in the year as farmers play catch-up, and it still expects solid earnings growth for 2017 compared to last year. That didn't stop Mr. Market from trimming nearly $1 billion off the company's market cap, though.

Investors do have a point. Bunge also took the slow start to the year as an opportunity to make slight adjustments to previously issued financial guidance. It now expects full-year 2017 earnings before interest and taxes (EBIT) to fall within a range $800 million and $925 million, which is down from the prior range of $895 million to $1,050 million. At market close, the stock had settled to a 11.3% loss. 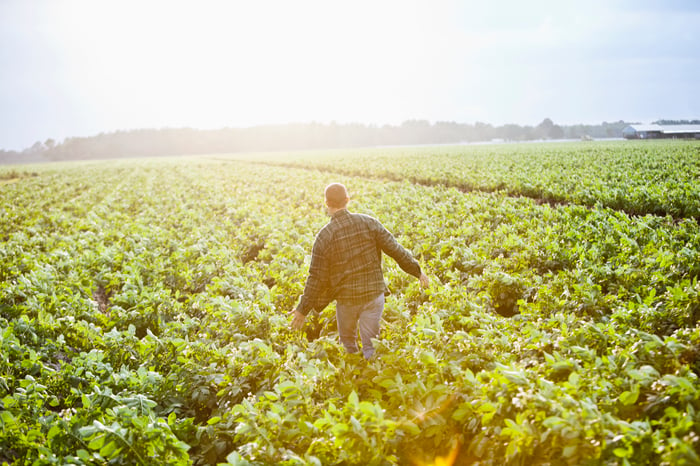 This is now the second year in a row that hiccups in South American agriculture have impacted Bunge. The good news is that delayed selling is only a short-term problem created by the increasingly popular trend in recent years for farmers to store more grain on farms, rather than in centrally located storage infrastructure. That practice slightly alters the logistics of getting products from soil to market, but with record soybean and corn harvests this year, following weak harvests recently, farmers are incentivized to sell.

Aside from agribusiness, which includes sales of oilseeds and grains, other segments turned in respectable performances given the seasonal considerations. Food & ingredients saw an insignificant 13% drop compared to the year-ago period. Meanwhile, sugar & bioenergy improved over last year's performance, while fertilizer was essentially flat. Both of the latter segments typically achieve their weakest results during the first quarter of the year due to the inter-harvest period for sugarcane. The timing factors for these segments, coupled with delayed selling for soybean and corn harvests, compounded the negative performance for Bunge during the period.

While the results were disappointing, there wasn't much Bunge could control to change the outcome. The good news is that farmers will pick up sales of the latest soybean and corn harvests in the coming weeks, the robust sugarcane industry will resume after its annual multiweek shutdown, and fertilizer sales will pick up in the second half of the year as farmers get ready for the next cycle. The stock drop today stings, but long-term investors should not be deterred.

This $9 Billion Company Sprinted 11.3% Higher in July, but Challenges Remain