In the past year and a half or so, Macy's (NYSE:M) has gotten serious about monetizing the value of its underutilized real estate. While investors have been pushing the company to make better use of its real estate for a while, Macy's efforts in this area have been overshadowed by a sales downturn that has swept across the department store industry.

This sales decline has eroded the company's profitability. As a result, Macy's stock remains near a five-year low, notwithstanding its real estate successes. 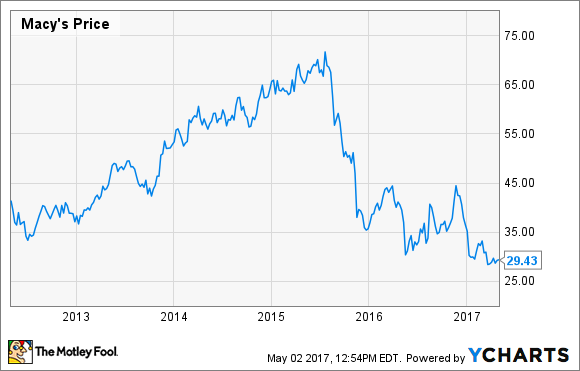 That said, Macy's is making steady progress in selling off excess real estate. This is allowing it to reduce its debt quickly. In the long run, by realizing the full value of its real estate, Macy's should be able to significantly increase the value of its stock, even if the retail market remains challenging.

In the past two years, Macy's has generated a substantial amount of cash from its real estate, announcing real estate sales worth roughly $800 million. In fiscal 2016 alone, its cash proceeds from asset sales totaled $673 million.

Yet Macy's is just scratching the surface of its real estate potential. Activist hedge fund Starboard Value estimated the value of Macy's real estate at more than $20 billion in early 2016. While Macy's has no intention of selling all (or even most) of its real estate, there is clearly a ton of room left for future real estate sales.

Chicago is up next

On Macy's fourth-quarter earnings call, CFO Karen Hoguet mentioned that the company was working on a plan to downsize its Chicago flagship store on State Street. Sure enough, the company has now confirmed that it is looking to sell the top seven floors of the State Street building.

Some media sources have described this as a major downsizing of the Chicago store. That's not quite accurate, though. While Macy's plans to sell off roughly half of the building (approximately 650,000 square feet of rentable space), very little of that square footage is used as retail space right now.

In conjunction with the sale, Macy's will need to relocate its furniture, rug, and mattress departments from the eighth floor to other parts of the store. But most of the space being sold is used for regional offices, event space, and storage -- or is completely empty.

The upper floors could be worth as much as $130 million in a sale, according to the Chicago Tribune. That's a substantial sum, especially considering that giving up this space would have a minimal impact on the store's operations or Macy's future earnings.

Lots of opportunities ahead

Based on Macy's relatively low guidance for asset sale gains in 2017, the company probably expects that a deal for the upper floors of the Chicago flagship store won't close until 2018. Macy's also wants to monetize the value of the underutilized upper floors at its most valuable property: its Manhattan flagship store. Getting a deal done there will take even longer.

Meanwhile, Macy's partnership with Brookfield Asset Management (NYSE:BAM) should start achieving tangible results within the next year or so. The goal of this partnership is to leverage Brookfield's expertise to explore additional or alternative uses for underutilized real estate that Macy's owns.

In some cases, this could include closing a Macy's store in order to redevelop a site. But in many cases, Macy's and Brookfield Asset Management believe it would be possible to build a mixed-use development on parking lots and unused land owned by Macy's.

Right now, Brookfield is creating pre-development plans along these lines for about 50 Macy's sites. It will take time to finalize these plans -- let alone implement them -- but the result will likely be another big cash windfall for Macy's, with a minimal long-term impact on its retail operations and earnings.

Thus, investors should think about the sale of the upper floors of the Chicago flagship as just one of many opportunities for Macy's to generate cash from its real estate while continuing to operate its best stores. Macy's near-term stock performance may continue to be driven by short-term sales trends. But in the long run, these efforts to capture the value of its real estate should drive big share-price gains for Macy's.