Please ensure Javascript is enabled for purposes of website accessibility
Log In Help Join The Motley Fool
Free Article Join Over 1 Million Premium Members And Get More In-Depth Stock Guidance and Research
By John Bromels – May 3, 2017 at 9:01AM

One of the worst-performing oil and gas stocks in the industry, Marathon has been trying to turn itself around. On May 4, we'll see if its efforts are working.

There have been two surprising things about Marathon Oil's (MRO -0.88%) recent earnings reports:

1. The oil and gas driller has surprised analysts for four straight quarters with better-than-expected earnings.

2. In spite of that performance, the company's stock has done worse than just about any other exploration and production company -- including rivals ConocoPhillips (COP 0.06%), Apache (APA -0.75%), and Anadarko Petroleum (APC) -- since energy prices started falling in 2014.

Will Marathon surprise us again when it reports Q1 2017 earnings on May 4? Here's what to expect. 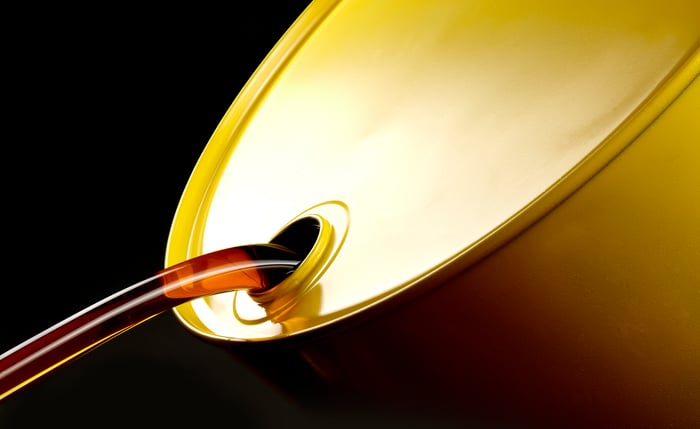 Throughout the first quarter, Marathon has been shifting assets from Canadian oil sands to more conventional shale plays in New Mexico and Texas. It's not hard to understand why. Oil sands are notoriously more difficult and expensive to extract hydrocarbons from than shale, and in an era of low oil prices and cost-cutting, a shift to cheaper and easier oil and gas sources is to be expected. ConocoPhillips is making similar moves of its own, while Anadarko Petroleum and Apache are also diverting resources to their Texas shale plays.

In March, the company announced three big portfolio shifts. First, it said it was selling its Canadian subsidiary for $2.5 billion in cash. Second, it said it would use $1.1 billion of that cash to acquire 70,000 Permian Basin acres in Texas and New Mexico, which currently produce 5,000 barrel of oil equivalents per day. Third, in a separate transaction, it said it would purchase 21,000 Northern Delaware Basin acres in New Mexico for $700 million in cash.

Because these transactions aren't scheduled to close until Q2, we shouldn't see any effects from them in the earnings report, but smart investors should pay attention to management's projections, which should say quite a bit about how these portfolio changes will affect the company's operations moving forward.

In February, the company announced a new strategic focus. It pledged to allocate more than 90% of its $2.2 billion in 2017 capital expenditures to high-yield resource plays in the U.S. and to reduce investment in foreign offshore drilling and oil sands. The March transactions represent a strong first step toward executing this strategy.

Also in February, the company issued guidance for Q1 2017. Despite "severe winter weather in North America, as well as scheduled and unscheduled downtime internationally," management projected that:

It should be very easy to check and see whether the actual results measure up to these goals.

A new sheriff in town

This will be the first earnings call to feature new CFO Dane Whitehead, who stepped into the job just after the company's Q4 2016 earnings were reported in February. Marathon CEO Lee Tillman will probably welcome him on the earnings call using similar language to his February statement: "I expect him to play a key role in driving our strategy and creating long-term shareholder value."

The installation of Whitehead brings the company's period without a permanent CFO to a close. Former CFO J.R. Sult abruptly resigned from his position in August, just shy of his three-year mark with the company, during a reshuffling of senior management. In a terse press release, Marathon cited only "personal reasons" and stated that Sult's departure was "not related to any disagreement with the company regarding financial disclosures, accounting, or business matters."

There was never any further explanation of the matter, but Sult stepped into the position at the worst possible time, right before oil prices went into freefall, taking the company's finances with them. In any case, the arrival of Whitehead allows Pat Wagner, who had been serving as interim CFO, to return to his prior role as vice president of corporate development and strategy.

While no oil and gas production company will be able to turn its fortunes around until oil prices recover, Marathon needs to do something to get its stock out from the bottom of the heap of its peers: 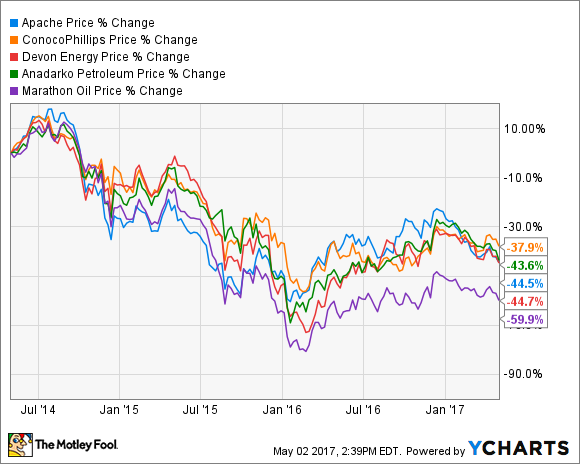 Investors can only hope this quarter's projections will indicate that the new strategy is having some success.