Despite a lingering oil sector downturn, ExxonMobil Corporation (NYSE:XOM) has remained an industry leader. For example, unlike many peers, it's been profitable throughout this difficult period and it's continued to increase its dividend annually  for 34 years and counting. While investors can take solace in the oil and gas giant's business performance, that doesn't mean the very real issues clouding the company's outlook can be ignored. Here are three challenges facing ExxonMobil Corporation today.

Low oil prices have an impact throughout Exxon's business. On the one hand, cheap oil actually helps the company's refining and chemicals operations because it means a key feedstock is, well, cheap. That, in turn, helps these businesses widen margins and make more money. This highlights a key advantage of Exxon's integrated business model. But if prices go up, margins will get squeezed. 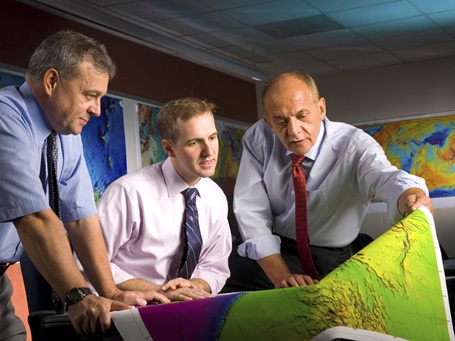 And then there's oil drilling, which is the largest part of the business. In the second quarter of 2014, before oil prices started a precipitous plunge from over $100 a barrel to a low around $30, Exxon's upstream segment had earnings of nearly $7.9 billion. In the fourth quarter of 2016, after prices had recovered from their lows to the $50 range, upstream earned roughly $1.4 billion. That figure is after taking out the impact of an asset impairment charge that pushed it nearly $650 million into the red.

The benefit of low oil prices can offset only a portion of the pain when it's on that scale. In other words, oil will continue to drive results up and down, and there's little Exxon can do about that. That said, the company has used the downturn to invest in new assets that should help enhance its flexibility in a low-oil-price world (more on the pros and cons of that below). .

Oil prices have a direct impact on the second big issue facing Exxon: maintaining reserves. From a big-picture point of view, oil companies have a set amount of oil and natural gas in the ground. Every barrel they pull up is one less barrel available for the future. Which is why oil companies are always on the lookout for new sources of oil. In 2016 Exxon replaced only about two-thirds of the oil it produced. That was the first time in more than two decades that it didn't replenish its reserves with at least the amount it drilled.

Replacement numbers go up and down, so one year isn't enough to indicate a problem...yet. The issue is that low oil prices make it harder to find profitable oil to replace what's pulled up, let alone enough to actually grow reserves. When oil is over $100 a barrel, companies can drill almost anywhere profitably (that's hyperbole, but you get the idea). When oil is at $30 a barrel, it's awfully hard to justify spending much money on anything.

That said, Exxon recently announced a large oil discovery in offshore Guyana. It's also expanded its footprint in the U.S. onshore space via an acquisition that roughly doubled its Permian basin holdings. Both should help support its reserves over time. And Exxon has plans to up its capital spending over the next few years, too. Still, keep an eye on reserves: If the situation doesn't improve Exxon will have a major long-term problem.

The Permian acquisition is notable because it indicates a shift in the company's thinking. Historically, Exxon has focused on large and expensive projects that took years to complete. That's pretty much the specialty of big integrated oil companies. Although Exxon is hardly abandoning such projects, low oil prices make it harder to justify those investments. 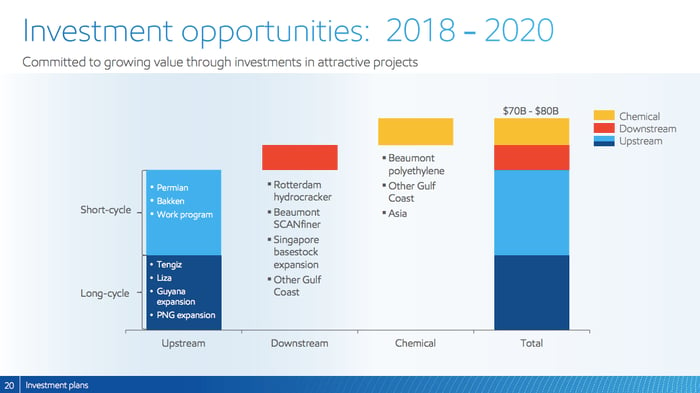 Exxon is shifting away from giant oil projects over the near term. Image source: ExxonMobil

What the Permian purchase suggests is that the oil giant is looking to increase its flexibility by increasing its exposure to onshore U.S. drilling, which is easier to ramp up and down as oil prices change. That surely adds flexibility, but it's a different approach than Exxon has taken in the past and it could limit the company's ability to provide investors with industry leading investment returns. The U.S. onshore space simply doesn't offer the same returns as large projects.

The increased focus on so-called "short cycle" projects (U.S. onshore) is coupled with continued investment in Exxon's downstream chemicals and refining businesses. The downstream business tends to have thinner margins than the upstream segment. In the end, more than half of Exxon's capital spending between now and 2020 is projected to support investments that don't provide the same return as big projects. That's potential headwind to Exxon living up to its past successes.

On the plus side, all of this should help to diversify Exxon's business. And that should make returns more stable over time, which isn't necessarily a bad thing if you are looking for a stable dividend paying business.

Same as it always was

Although Exxon just went through a leadership change, the company is pretty insular and changes relatively slowly. That's not a bad thing in this case, since Exxon has long been an industry leader. I believe strongly that it will survive this downturn and prosper again -- otherwise I wouldn't own it.

However, my confidence doesn't alter the fact that the company has to deal with low oil prices and their impact on earnings. Or the impact that cheap oil has on finding profitable new oil resources. And then there's the company's increasing focus on businesses that don't offer the same bang for the buck as the giant oil projects for which Exxon is known. There are clearly risks here.

That said, all of this bad news could be a good opportunity for long-term investors since the yield is toward the high end of its historical range. But you have to believe Exxon can survive the notable challenges it's facing today, and thrive in the future if you are going to pull the trigger here.