Apple (NASDAQ:AAPL) has garnered all sorts of criticism in recent months following the introduction of the new MacBook Pros that exclusively use USB-C ports. That requires users to buy and carry around a collection of dongles for devices that use older standards.

There have been conflicting third-party data points. Slice Intelligence said last year that demand was soaring, quickly overtaking sales of competing laptops. A rumor last month suggested that sales of the older MacBook Pro model with traditional ports "went through the roof" following the introduction, and "shot up even higher" once reviews started getting published. Well, investors now have some data on the matter, directly from Apple.

On the earnings call earlier this week, Apple said that "strong demand for our new MacBook Pros" contributed to the robust results in the Mac business. Total Mac units were up 4% to 4.2 million, and Mac revenue grew an even stronger 14% to $5.8 billion. That outsized increase in revenue is thanks to a meaningful jump in average selling prices (ASPs). Mac ASPs hit $1,392 during the quarter -- the highest level in nearly a decade. 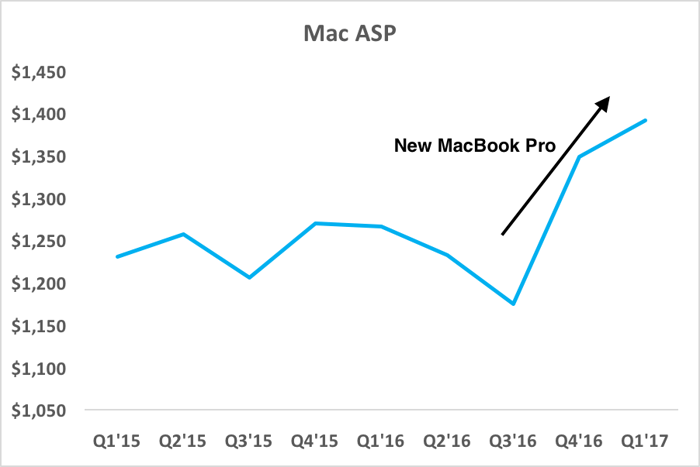 The new MacBook Pros launched alongside a price bump -- not uncommon for when Apple introduces redesigned products to help absorb the higher cost curve -- and start at $1,499 for the 13-inch model without a Touch Bar. The 15-inch model starts at $2,399 but reaches up to $4,299 if you add all the bells and whistles. Then you could easily spend another $100 to $200 on dongles alone (which are technically recognized in the other products segment and don't affect Mac ASP).

On the call, CFO Luca Maestri noted, "Demand for MacBook Pro was very strong, helping to drive overall portables growth of 10%, twice the growth of the portables market." Apple stopped disclosing the mix of laptops vs. desktops years ago, so we don't know how many laptops Apple shipped in unit terms, but consumers have been shifting to laptops since the dawn of time.

Still, it's safe to say that the new MacBook Pros are indeed proving quite popular, and that becomes abundantly clear when looking at ASP trends. Besides, it's not as if there was some catalyst driving sales of other high-end Macs, and it's clear that the Mac Pro isn't aging well.

Apple's used to it

Ultimately, Apple is accustomed to this sort of backlash, which arises every few years when it forces some new standard upon consumers and the industry at large. When Apple kicked off the USB-C transition with the 12-inch MacBook, marketing chief Phil Schiller told Mashable, "We found that the best thing we could do is push boundaries beyond what's expected, beyond what's comfortable sometimes."

CEO Tim Cook also likes to tell a story of his first day at Apple in the late '90s. When he showed up, there were customers protesting outside because Steve Jobs had axed the Newton. Cook's takeaway was that Apple customers are often quite vocal and passionate, so much that they would go protest at Apple headquarters, but that passion translates into loyalty.

Professionals may have vocally protested against dongles, but they're still buying MacBook Pros.