Detroit automakers, fresh off strong earnings last week, all posted less than thrilling April sales data on Tuesday, promptly sending shares of each automaker lower. Ford Motor Company's (NYSE:F) 7.1% sales decline was its second disappointing month in a row and not the start to the spring season investors had hoped for. General Motors (NYSE:GM) didn't fare well, either, posting its first decline since January, and Fiat Chrysler Automobiles (NYSE:FCAU) hasn't recorded a sales gain since August.

This is life as we know it amid a plateauing sales cycle in the U.S., but there was still some positive data from the automakers' April. Here are the highlights.

Ford's total April sales result was driven lower by its 10.5% decline in retail sales compared with the prior year, partially offset by flat fleet sales. Demand for passenger cars continues to fade, and it's showing. Sales of the Fiesta, Fusion, and Focus were down 25%, 19%, and 17%, respectively; Ford's entire car segment was down a staggering 24%. And while April wasn't the start to the second quarter that investors had hoped for, at least in terms of total sales volume, Ford is at least sticking to its guns and isn't chasing sales with massive incentives. 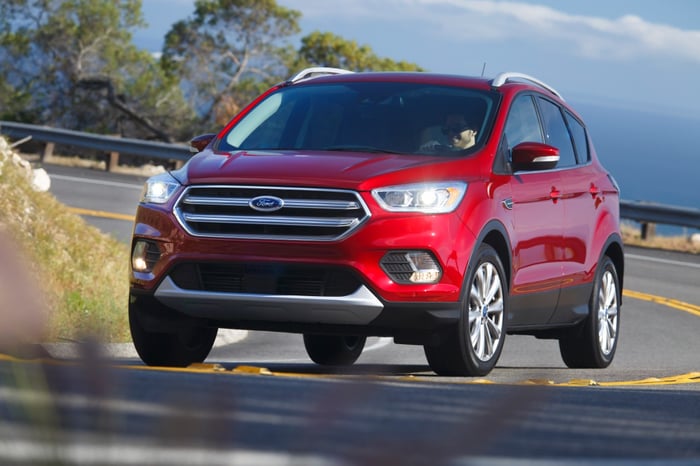 On the bright side, full-size trucks continue to fly off dealership lots. Ford's F-Series tallied 70,657 units sold in April -- historically, anything above 50,000 in a month is strong -- with an overall $3,700 increase in average transaction prices. The Super Duty is even more ridiculous, with its average transaction prices increasing by $8,400 to an April record of $58,200 per truck. Ford's SUVs are also selling well: SUV sales totaled more than 67,000 units in April, a 3% gain over the prior year, and enough to set an April record for the company.

General Motors' sales decline during April was led by its high-volume Chevrolet brand, which was down a steep 10.4%, compared with the prior year. That more than offset Buick's and Cadillac's respective 17% and 9.5% increases, since Chevrolet accounts for the majority of the automaker's sales. However, GM continued to wind down its fleet sales, making for a more profitable mix. Fleet sales were 52,495 units in April, an 11% decline, and sales to daily rental companies -- the least preferable fleet sales -- were down 20%.

Unlike its crosstown rival Ford, General Motors' full-size trucks didn't have a great month. In fact, sales of the Chevrolet Silverado were down 20% to 40,154 units and the GMC Sierra was down a similar 15% to 17,400 units. Its midsize trucks didn't fare much better, either, with the Chevrolet Colorado and GMC Canyon posting respective declines of 11% and 22%.

Similar to its Detroit counterparts, FCA checked in with a tough April, as sales dropped 7% compared with the prior year. Part of that decline was due to a pullback in fleet sales. FCA's fleet sales represented only 17% of total sales in April, which is well below Detroit automakers' historic norm. The company's Chrysler and Dodge brands continue to contribute very little, with each brand posting a 3% sales decline. If you combine all Chysler and Dodge vehicle sales for April, it would still trail those of Ford's F-Series alone.

Other highlights include FCA's Ram Truck brand, which posted a 5% sales increase compared with the prior year, driven in large part by an 8% increase in Ram pickup-truck sales. The Jeep Grand Cherokee had a solid month, with sales increasing 6% in April compared with the prior year. However, that was essentially the only Jeep vehicle to post a gain in April, and the overall Jeep brand recorded a drastic 17% sales decline as it gears up for the all-new 2017 Jeep Compass launch.

While April's automotive sales figure won't impress investors, it's worth noting that as the broader economy improves, wages rise, and interest rates remain fairly cheap, there's still plenty of fuel to keep vehicle sales near historic highs for the near term.