Please ensure Javascript is enabled for purposes of website accessibility
Log In Help Join The Motley Fool
Free Article Join Over 1 Million Premium Members And Get More In-Depth Stock Guidance and Research
By Anders Bylund - Updated May 5, 2017 at 3:13PM

The $38 billion merger of these semiconductor titans keeps inching closer and closer to the finish line.

Semiconductor giant Qualcomm (QCOM 4.17%) just re-upped its tender offer for control of automotive computing specialist NXP Semiconductors (NXPI 3.79%). The company also provided updates on how the process is working out.

Are these companies getting any closer to signing on the final dotted line? Let's have a look.

According to a Qualcomm press release, 50.3 million NXP shares were tendered to Qualcomm's offer and not withdrawn as of May 1. That works out to 14.9% of NXP's total number of shares outstanding, or 20.2% of the public float.

Here's how the tendered share count compares to the last three renewals:

There have been some ups and downs, but no mass migration to either end of the tendered-shares pool. NXP insiders hold roughly 26% of the shares printed, which means a couple of things:

Besides the percentages, Qualcomm took this opportunity to serve notice that all the necessary paperwork has been filed in important markets like China, Russia, and the European Union. American regulatory bodies have already waved the deal through, but there are still a few speed bumps left to cross.

To that end, Reuters reports that the European Commission should have a ruling in place by June 9. That body might ask for some concessions before approving the merger, mainly ensuring that Qualcomm rivals will continue to have access to NXP's Mifare smart card technologies. 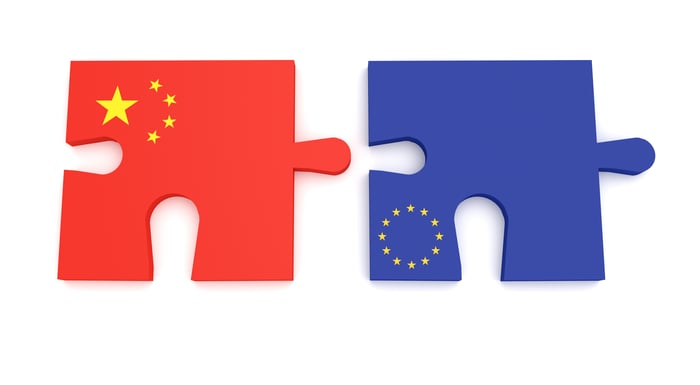 All things considered, the merger looks likely to sail over the last few hurdles. Specific regulations related to Mifare cards might slow things down by a few months, leaving the finish line close to the originally announced "end of 2017" deadline. Otherwise, Qualcomm and NXP might be able to join forces as early as June.

Investors expect nothing less. NXP shares traded as high as $106 per share on Tuesday, just 3.5% below Qualcomm's all-cash $110 buyout price. There is not much room left for exploiting NXP discounts based on uncertainty about the Qualcomm deal at this point.

Don't even worry about doing the paperwork to tender your NXP shares to the Qualcomm offer -- it's probably best just to sell the stock and move that capital elsewhere right now. Qualcomm is always a solid choice if you want to stay invested in NXP for the long haul.