Most airline stocks had a quiet month in April. Industry earnings plunged during the first quarter due to rising fuel and labor costs, but investors were content to overlook this earnings weakness based on improving unit revenue trends across the sector.

However, Hawaiian Holdings (NASDAQ:HA) stood out last quarter as one of the few U.S. airlines to expand its profit margin and grow its earnings per share. As a result, investors drove Hawaiian Holdings stock up 17% during the month of April, according to data from S&P Global Market Intelligence. This offset nearly all of the stock's losses from the previous three months: 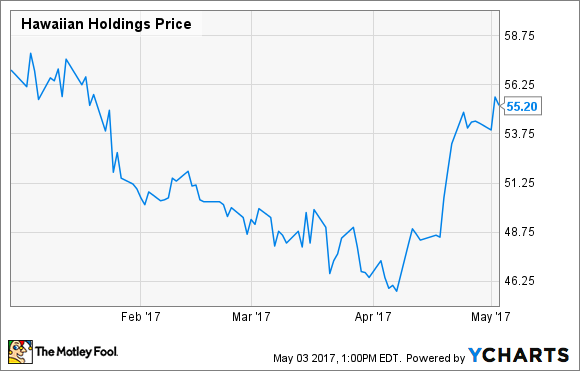 Most U.S. airlines are just starting to return to unit revenue growth after more than two years of declining fares. However, Hawaiian Airlines' unit revenue recovery began about a year ago -- and it is still gaining steam.

Back in January, Hawaiian's management projected that the carrier would log a solid increase of 4% to 7% in revenue per available seat mile (RASM) during the first quarter. This forecast was actually too conservative, though. Early last month, Hawaiian Airlines raised its first-quarter RASM guidance, calling for an increase of 6.5% to 8%. The company ultimately reported a 7.6% year-over-year RASM gain for the quarter. This stellar unit revenue result was the primary driver of Hawaiian Holdings stock's gains last month. Indeed, Hawaiian's RASM growth allowed it to overcome steep cost headwinds to post a 17% year-over-year increase in its adjusted profit for the first quarter.

Hawaiian Airlines' revenue momentum remains strong. Management forecast that RASM will rise 5.5% to 8.5% this quarter. That should be enough to offset the company's cost headwinds once again.

Looking further ahead, Hawaiian's unit revenue growth is likely to moderate as year-over-year comparisons become increasingly difficult. However, cost performance should start to improve, especially as Hawaiian ramps up service with its new fleet of A321neos during 2018 and 2019. This could enable further earnings growth and share-price gains for Hawaiian Holdings in the years ahead.