Please ensure Javascript is enabled for purposes of website accessibility
Log In Help Join The Motley Fool
Free Article
Join Nearly 1 Million Premium Members And Get More In-Depth Stock Guidance and Research
By Jeremy Bowman – May 6, 2017 at 8:48AM

You may think Starbucks is expensive here, but prices for a latte in other parts of the world might change your mind.

In little more than a generation, Starbucks Corporation (SBUX -4.44%) has gone from a small coffee chain to a global empire. The java juggernaut now operates in 75 countries, and has become the second-most valuable restaurant chain in the world after McDonald's. With more than 25,000 locations around the globe, it's opening about 2,000 stores every year.

Starbucks has built such a powerful business in part because of its ability to deliver an affordable luxury. With its focus on being a welcoming "third place" away from home and work, and its tasty drinks for $5 or less, Starbucks has created a brand that no other coffee chain can match.

The green siren has a reputation for premium products -- some have nicknamed the chain Five Bucks -- but you may be surprised to learn that Starbucks drinks are actually cheaper in the U.S. than in any other country.

According to a study by ValuePenguin, which measured the price of a "tall," or small, latte in 44 countries around the world, the U.S. had the lowest price at $2.75. A number of other western countries were close, with Australia at $2.86, the U.K. at $2.88, and Canada at $3.06. However, outside of the West prices were much higher. In China, for instance, a small latte was $7.18; Russia topped the list at $12.32, though that may be due in part to the crash in the ruble. 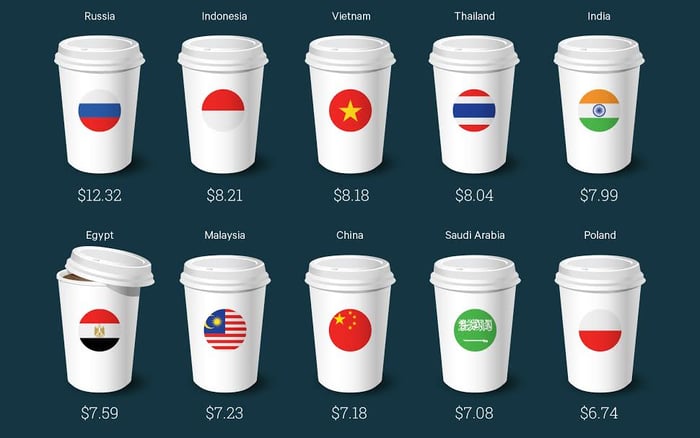 The difference between Starbucks' prices in western countries and those in Asia and the Middle East, where lattes tend to be the most expensive, underscores a key advantage of the Starbucks brand.

In the U.S, Starbucks may be seen as an indulgence, but the brand draws a wide range of customers, from teenagers and students to white-collar workers and creative types. According to The NPD Group, 48% of Americans visited a Starbucks last year, representing a vast cross-section of the country.

But in developing parts of the world, Starbucks' higher prices target a more exclusive segment of the population. In those countries, Starbucks is seen as an "exotic, status-laden chain," and an "embodiment of American affluence," according to ValuePenguin.

Like other American brands, the Starbucks label carries cachet in such countries in a way that makes it difficult to compete with.

Starbucks' status as an aspirational brand in China has been especially important as Howard Schultz, who just stepped down as CEO, has said that he sees the Chinese market eventually being bigger than the U.S for the company.

In a tea-drinking nation, Starbucks has capitalized on China's desire for conspicuous consumption, or products that connote status, to build its brand. It's offered luxurious dining rooms with air conditioning -- once a rarity in China -- and become a gathering place for executives and other upwardly mobile Chinese.

Analysts beat up on the coffee chain's stock after its recent earnings report, as management lowered its full-year guidance for earnings per share. However, the ValuePenguin study is a reminder of Starbucks' tremendous power, and its growth potential in China and beyond. Overall results from Starbucks' second quarter may have disappointed, but growth in China remained impressive: Comparable sales jumped 7% and operating income jumped 36% in the China/Asia-Pacific region, as the operating margin increased 380 basis points to 22.9%.

If Schultz is right that China will one day be bigger than the U.S. for the company, Starbucks has plenty of growth ahead of it. Its aspirational status will continue to serve as a competitive advantage, guiding that growth into the future.