World Wrestling Entertainment (NYSE:WWE) has been around for 35 years, and in that time, the company has become well-known for its extravagant live events that are broadcast around the world to a devoted fan base. Combining wrestling with a storyline of villains and heroes, the company's content is exciting and unique. But are the company's long-term prospects as compelling as the content it produces?

A rapid rise in the world of streaming

The most recent money-making innovation at WWE was its over-the-top (OTT) streaming service, known as the WWE Network. The company introduced the service to its fans in February 2014, and the technology behind the network is powered by BAMTech. Subscribers pay $9.99 per month for access to the latest events and a massive library of past content.

The impact the WWE Network has had on the company is evidenced by comments from its 2016 annual report:

In 2016, WWE Network was recognized as the fifth-largest streaming video-on-demand service in the United States, alongside Netflix, Hulu, Amazon, and MLB.TV, with the second-highest net promoter score (behind only Netflix).

Not bad for a network launched only three years ago. 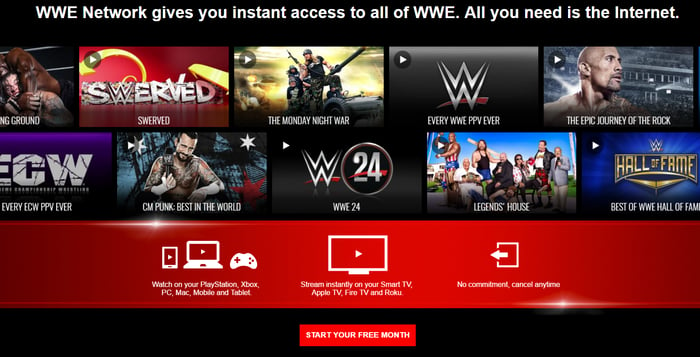 How does WWE make money?

The company has four contributors to its revenue stream. As one might expect, the media division is the primary driver of revenue, consisting of WWE Network subscriptions, pay-per-view event fees, advertising fees, television distribution fees, website advertising, and DVDs. Other sources of revenue are live events (primarily ticket sales), consumer products (merchandise like toys and video games), and WWE Studios (a global distributor of movies to help build the brand that is a very small source of income).

Below is a table of total revenue and the percentage contributed from each WWE segment over the past three years:

The WWE Network is the No.1 reason I am looking at the company as an investment. The chart below breaks out the WWE Network, showing its growth in revenue and subscribers:

Prior to the existence of the WWE Network, fans would pay high prices to view a single pay-per-view (PPV) event on cable television. Now, many fans have transitioned to the streaming service, which includes all major events with the price of the subscription. The chart below shows the promising results of this transition:

Diversifying the means of distribution for its content appears to be working as total revenue from broadcasting the events grows.

However, I am a bit concerned that subscriber growth was only 15% last year. The company put out a press release last month after hosting its latest edition of WrestleMania to boast that 1.95 million households watched the event over the WWE Network. This number includes viewers who are in a 30-day free trial period for the service, but if the WWE can manage to hold onto some of these subscribers and convert them to paying customers -- management has cited previous conversion rates as high as 70% -- that could drive subscriber growth up to approximately 25% from year-end 2016.

For now, I am content to follow the progress the WWE makes in growing its network subscriber base. Soon, investors will see whether the company truly has an expanding, worldwide audience or if its streaming service is approaching a plateau.