With all of the attention the media pays to Apple's (NASDAQ:AAPL) revenue, earnings, and iPhone sales, it's often easy to overlook other facets of the tech giant's business, such as its App Store, Mac, and Apple Watch. Fortunately for investors, Apple management gave some useful updates on these topics during its earnings call last week.

Here are some of the most interesting tidbits from Apple's earnings call (by way of a Reuters transcript).

With Apple's services segment serving as the company's most consistently strong growth driver in recent quarters, investors have good reason to be interested in the sustainability of the segment's growth. This is why it's always good to get an update on how App Store sales are performing. Playing a key role in the segment's revenue growth, services revenue growth could slow if App Store sales peak.

App Store momentum is terrific, with revenue growing 40% year over year to an all-time quarterly record. The number of developers offering apps for sale on our store was up 26% over last year, and we're thrilled to see their success.

Apple's Mac business is crushing it

While Apple's iPhone segment may get all the attention, investors shouldn't overlook the company's Mac business. Accounting for a small but still meaningful 11% of Apple's revenue, Mac sales were up a nice 14% year over year during Apple's second quarter -- not far below Apple's 18% year-over-year growth in its services segment.

Revenue [for the Mac segment] was up 14% year over year and set a new March quarter record. We sold 4.2 million Macs, up 4% over last year, compared to zero growth in the PC market, according to IDC's latest forecast. Demand for MacBook Pro was very strong, helping to drive overall portables growth of 10%, twice the growth of the portables market. 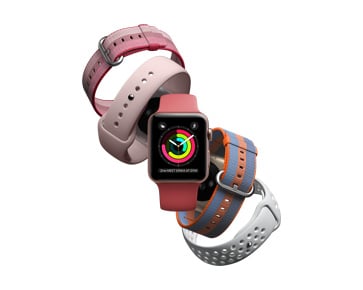 Apple Watch is doing great, too

Thanks to its fast-rising sales, Apple Watch, which is still lumped in with Apple's other products segment, is turning into a significant business for Apple. After the product's sales hit a record high in Apple's holiday quarter, Apple Watch sales continued on this momentum, with sales of the device nearly doubling year over year in Q2, management said. "Apple Watch is the best-selling and most loved smartwatch in the world, and we hear wonderful stories from our customers about its impact on their fitness and health," Cook noted.

Revenue in all of Apple's geographic operating segments, except Greater China, was up year over year in Apple's second quarter. Hong Kong was a particularly weak market in Apple's Greater China segment.

Cook explained the company's challenges on Hong Kong, as well as what he expects in Hong Kong going forward:

[O]ur performance continued to be weak in Hong Kong, which has been hit a bit harder as the tourism market continues to slump. Also, where the iPhone 7 Plus did well, we didn't perform as well on some of the previous-generation iPhones. ... What I now believe is that we'll improve a bit more during this current quarter, not back to growth but improve -- but make more progress. And we continue to believe that there's an enormous opportunity there.

Though the iPhone may be more important to Apple's financial results than these four areas of the tech giant's business, all four of these trends are worth keeping an eye on. Investors should look for continued growth in App Store, Mac, and Apple Watch sales, as well as look for improvement in Hong Kong.