As humans, we love using stories to explain the world around us. The problem is that the real world is often far more complicated than can be captured in one story.

In 2017 alone, there's been a rash of brick-and-mortars throwing in the white flag -- either by filing for bankruptcy, closing stores, or missing crucial debt payments. 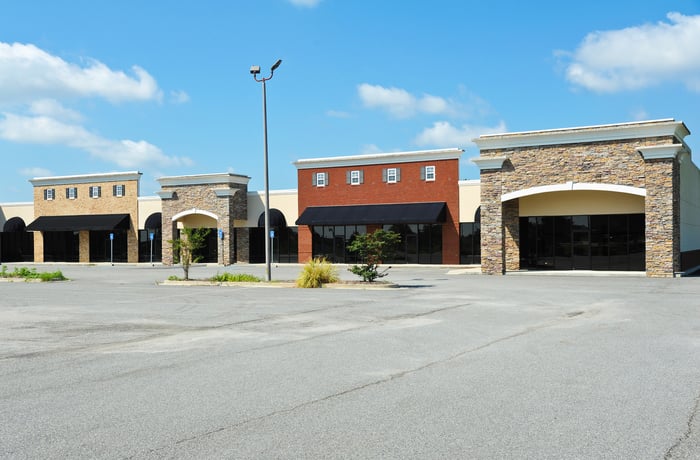 In the face of such a shocking number of closures, there's one narrative that we hear over and over again: e-commerce, particularly the presence of Amazon (NASDAQ:AMZN), is ushering in the death of brick-and-mortar locations.

Bezos isn't to blame. This group is...

But in a brilliant post by Yves Smith at Naked Capitalism, we can see that reality and the narrative that we're telling ourselves don't match up.

Without a doubt, the ascendance of Amazon has had an effect on traditional retailers. But, the post argues, that effect needn't have been a deathblow. Under different circumstances, it would just lead to businesses slowly changing their tactics.

That's not what's happened, and as one commenter put it:

Here's how the basic scheme works, as described by Smith:

2.     They roll out a real-estate company that owns all of the land on which the retailer operates. They now have two separate entities: Retail and Real-Estate.

3.     Retail pays top-dollar rent to Real-Estate to inflate the value of Real-Estate's assets.

4.     This saddles Retail with onerous debt, making declining traffic even more of a problem.

The careful reader will see that it would be odd for the private equity firm to essentially hamstring its retail operations -- ensuring its failure. But there are perverse incentives in private equity, according to Smith:

"The private equity fund manager makes out regardless of whether their investors do well, since nearly 2/3 of their total fees are not related to performance."

Furthermore, if the equity fund manager is convinced that brick-and-mortars are dying, this strategy allows for maximal cash dispersions. Monies from Retail are paid to Real-Estate -- in the form of inflated rents -- and the value of Real-Estate's holdings are artificially high.

Depending on how much money the firm can squeeze out, it can be a pretty good plan. Bond and debt holders are left with nothing, and employees of Retail need to start firing up their resumes.

The big unintended winner, of course, is Amazon.

If you're an investor in Amazon, you might shrug your shoulders and say, "Well, that sucks for those guys, but as a shareholder, I'll take it." And indeed, such moves are creating a vicious cycle that's accelerating the death of some brick and mortars.

But for those who hold shares of publicly traded brick-and-mortar retailers, there's hope. While those located in malls may experience halo-effect damage -- when many retailers close, traffic drops, regardless of whether or not it was held by private equity -- those who can stand on their own have a fighting chance.

Indeed, there may be some very appealing deep value deals among this bunch, as fellow Fool Adam Levine-Weinberg recently highlighted.

But for me, the message is simple: Amazon represents 20% of my real-life holdings. While I don't like seeing private equity drain out the livelihoods of formerly vibrant businesses, I know that the practice is only accelerating a process that cements Amazon's place in the world.