Please ensure Javascript is enabled for purposes of website accessibility
Log In Help Join The Motley Fool
Free Article
Join Nearly 1 Million Premium Members And Get More In-Depth Stock Guidance and Research
By Rick Munarriz – May 8, 2017 at 9:09AM

It was a good week to own a piece of Fitbit (FIT). Shares of the activity-monitoring wearables maker soared 7.5% last week, its second strongest weekly gain in 2017.

Fitbit stock gained steam after the company came through with better-than-expected financial results on Wednesday. Revenue plunged 41% to $298.9 million in Fitbit's first quarter, a brutal showing for most companies, but investors were braced for a 44% drop here. Fitbit's adjusted loss of $0.15 a share also fared better than the $0.19 in red ink analysts were targeting.

The report was a beat on both ends of the income statement, but Fitbit can't claim total victory. A big reason for the beat it did get is that Alta HR, Fitbit's latest fitness tracker, began shipping in late March. Fitbit had initially expected to roll out Alta HR in early April.

The timing is important, as Fitbit credits 84% of the first quarter's sales to just three products, including Alta HR. It's a pretty big deal for the device's release to slip out of the second quarter and into the first. It also explains why Fitbit's guidance for the current quarter is soft.

Fitbit's guidance calls for a loss per share of $0.14 to $0.17 on $330 million to $350 million in revenue for the current quarter. Analyst targets were for a deficit of $0.11 a share on $350.2 million in revenue. The reasonable conclusion is that some of these Wall Street pros failed to tweak their models after Alta HR shipped early, a move that should've raised first-quarter projections at the expense of the second quarter. A stock can sometimes take a hit on weak guidance, but Fitbit shareholders have been hit so hard that it's easier to view the total first half of the year as a slight victory than to break things up in two parts. 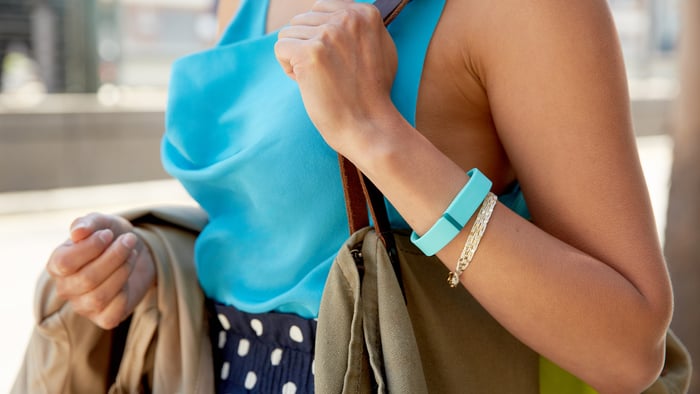 Fitbit argues that consumer sell-through activity is running stronger than its posted results. There's been a glut of Fitbit devices collecting dust on retailer shelves, something that the wearables pioneer expects to be resolved by the second half of this year.

Fitbit is also encouraged by its growing user base. Just 36% of all activations came from repeat customers during the first quarter, and even within that group, 40% of those repeat customers had been inactive for at least three months. Fitbit sold 3 million devices during the quarter -- a lot less than the 4.8 million wearables it moved a year earlier, but still a substantial and ultimately incremental number.

There's also hope for Fit in the corporate-wellness market. Enterprises sales still account for less than 10% of Fitbit's revenue, but this is a dynamic niche as companies subsidize Fitbit bracelets for employees as a way to encourage active lifestyles lower healthcare costs.

The second quarter isn't going to be pretty, but comparisons should get easier after then as inventory channels clear up and year-over-year growth becomes easier to achieve. Fitbit's fundamentals haven't bottomed out yet, but investors may have a different opinion when it comes to Fitbit stock.