Please ensure Javascript is enabled for purposes of website accessibility
Log In Help Join The Motley Fool
Free Article Join Over 1 Million Premium Members And Get More In-Depth Stock Guidance and Research
By Rick Munarriz – May 8, 2017 at 2:40PM

The leading provider of flash-sale deals disappointed in its latest quarter, generating another double-digit percentage move.

Earnings season has been a volatile time for Groupon (GRPN -2.94%) shareholders, and last week the results were rough on the bulls. Shares of the experience and merchandise discounter plummeted 13.8% after posting a poorly received financial report.

Revenue for the first quarter clocked in at $673.6 million, 8% lower than the $732 million that it reported a year earlier. However, if you back out the international markets that Groupon has bowed out of through 2016 as discontinued operations -- and that's the way that Groupon is presenting its financials now -- revenue slipped by just 4%.

Analysts were holding out for more. They were targeting revenue of $725 million. The silver lining is that margins improved to the point of delivering an adjusted profit of $0.01 a share. Wall Street was bracing for a small quarterly deficit. 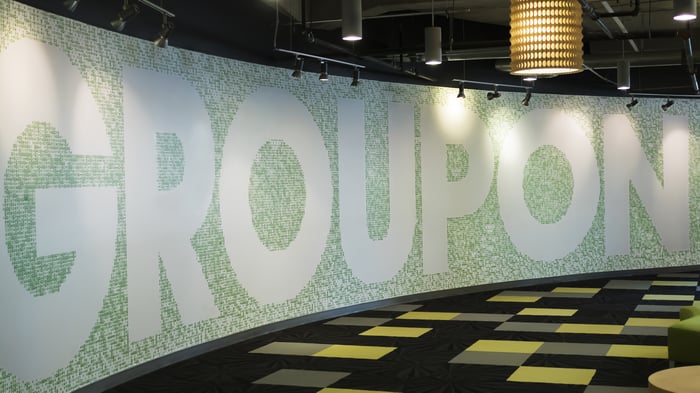 Groupon investors should already know that earnings season can be extremely rewarding or devastating. This isn't the first time that Groupon stock has delivered a double-digit percentage move the week it reports fresh financials.

You have to go all the way back to summer 2015 to find the last time that Groupon stock didn't post a double-digit percentage move during the week it reported financial results. An interesting trend in this seven-quarter streak may become clear after eyeing the moves. Every quarterly move has been followed by a double-digit percentage move in the other direction the following quarter. The stock has gone down 26%, up 18%, down 19%, up 30%, down 19%, up 30%, and down 14% in that span. It's a coincidence, of course, but would anyone really be surprised if Groupon's stock moves at least 10% higher this summer when it pushes out its second-quarter results?

The company is holding up better than the ho-hum financials and the market's cool reaction suggest. It's still growing its base of deal seekers, adding 500,000 net new customers in North America. Margins are improving as operating costs improve and its low-margin merchandise sales shrink in volume. Groupon's cash-rich and debt-free balance sheet will help see it through its turnaround, and it wouldn't be a surprise if seven quarters of double-digit returns stretch to eight in a couple of months.