Please ensure Javascript is enabled for purposes of website accessibility
Log In Help Join The Motley Fool
Free Article Join Over 1 Million Premium Members And Get More In-Depth Stock Guidance and Research
By Adam Levy – May 8, 2017 at 3:43PM

The competition could start putting pressure on T-Mobile's ARPU.

The competition in the U.S. wireless industry is increasingly fierce, putting pressure on service revenue at the largest players, AT&T (T 0.16%) and Verizon Communications (VZ 0.26%). The company putting the pressure on, for the most part, has been T-Mobile (TMUS 0.62%).

Most recently, T-Mobile introduced a new unlimited data plan that includes taxes and fees in the pricing. It also agreed to lock customers in at their current rate for as long as they want to keep their current plan. Even so, the company managed to grow average revenue per postpaid subscriber 2.9% year over year in the first quarter.

Now that AT&T and Verizon have introduced unlimited plans of their own and are getting more aggressive with pricing and offers, can T-Mobile continue to increase average revenue per user (ARPU)? 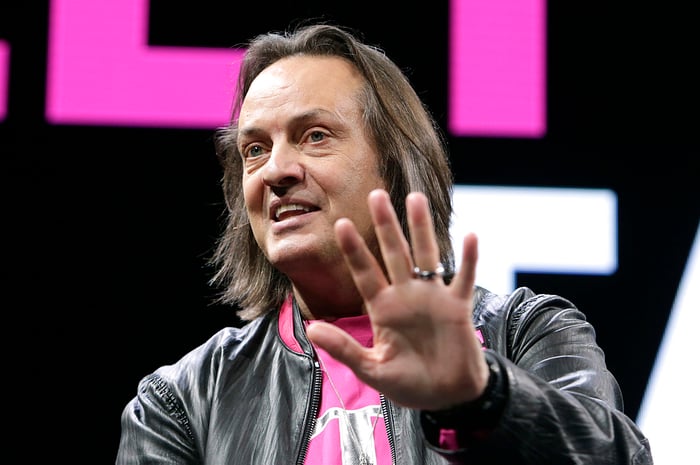 T-Mobile's new "all in" pricing effectively lowered the price of its T-Mobile ONE unlimited plan. Some previous T-Mobile ONE subscribers could opt into the new pricing and lower their monthly bills. Verizon experienced a similar trend when it introduced its new unlimited plan as its highest-paying customers changed to the new lower-priced plan.

But even with the changes, T-Mobile still increased ARPU. The same can't be said for Verizon or AT&T. Verizon's average revenue per account fell to $136.98 in the first quarter from $145.34 in the same period a year ago. That's despite increasing connections per account from 3.0 to 3.08. Meanwhile, AT&T's phone-only postpaid ARPU fell 2.4% to $58.90.

T-Mobile doesn't expect ARPU to keep climbing through all of 2017, though. Management reiterated expectations for overall ARPU to remain "generally stable" in 2017 compared to 2016. We might see some quarterly fluctuations based on migration to T-Mobile ONE.

One size fits all

T-Mobile no longer offers capped data plans for postpaid subscribers; the only option is T-Mobile ONE. As a larger percentage of customers join the new plan, T-Mobile expects it to be accretive to revenue per user. Considering T-Mobile is still adding hundreds of thousands of new postpaid phone subscribers every quarter, it should see a continued benefit from the growth of T-Mobile ONE as a percentage of customers.

In fact, T-Mobile expects that all of its customers will eventually migrate to T-Mobile ONE. During the company's first-quarter earnings call, COO Mike Sievert told analysts, "You're going to see a stepwise movement through the base as we give people the kinds of offers and incentives that they need to move across [to T-Mobile ONE]."

He likened T-Mobile ONE to the introduction of T-Mobile's Simple Choice plans in 2013, which eventually reached 95% to 96% penetration with its customer base. At that level of penetration, T-Mobile could have significantly higher ARPU.

Not all about ARPU

With T-Mobile's latest initiative to allow people to lock in their pricing indefinitely, customers may be more hesitant to migrate. T-Mobile will have to provide meaningful incentives for customers to switch, and that could reduce the impact of the new unlimited plan on ARPU.

T-Mobile certainly faces pressure on its ARPU, but the long-term outlook still looks strong for the company despite pressure from competitors and its own pricing initiatives. Just as importantly, T-Mobile stands to gain operating efficiencies from switching most of its customers to T-Mobile ONE.