Please ensure Javascript is enabled for purposes of website accessibility
Log In Help Join The Motley Fool
Free Article Join Over 1 Million Premium Members And Get More In-Depth Stock Guidance and Research
By Tyler Crowe – May 8, 2017 at 7:23AM

Cheniere Energy has kept to its construction schedule and continued to ramp up its LNG production capacity at Sabine Pass.

For the second quarter in a row, Cheniere Energy's (LNG -4.01%) earnings blew by analyst expectations. While the company benefited from one-time gains in the fourth quarter, this most recent result was simply the product of the company delivering on its operations. With more liquefied natural gas (LNG) production capacity still coming on line, these results have to make investors excited about Cheniere's future.

Here's a brief look at Cheniere's most recent results, what happened during this past quarter, and what investors can expect from this company over the next couple of years as it continues to build out its LNG production capacity. 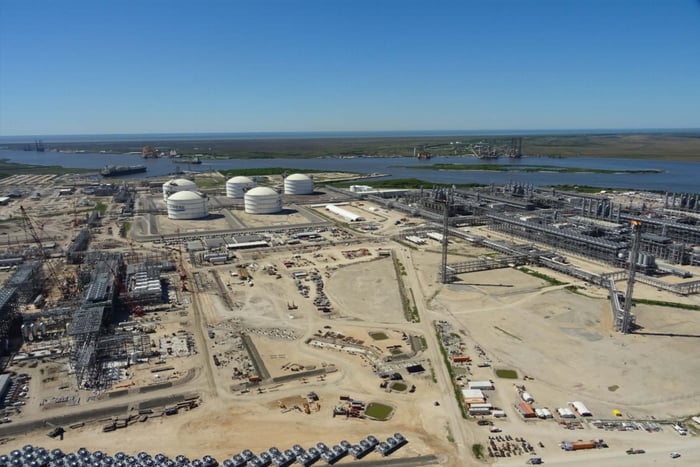 If we were to compare this most recent quarter to the prior one, it would seem that something went wrong. Even though revenue and operating income increased significantly, net income to shareholders was cut in half. That discrepancy has more to do with some accounting changes in the prior quarter. At the end of last year, Cheniere realized a $232 million gain from some natural gas derivative contracts. Those one-time gains added $0.80 per share to fourth-quarter results.

What is probably most spectacular about this quarter, though, is seeing the difference a year makes for the company. This time last year, Cheniere was yet to start commercial operations of its Sabine Pass facility. Fast-forward to this most recent quarter, Cheniere has Trains 1 and 2 at its Sabine Pass facility operating at full capacity. Furthermore, Train 3 started commercial operations in March.

That ramp-up is still ongoing, too. Next quarter, investors can look forward to a full quarter of commercial operations at Train 3 and some additional commissioning cargoes from Train 4. By the end of the year, the first phase of Sabine Pass will be complete, and the company should be delivering LNG cargoes at a rate of 18 million tons per year.

One thing investors need to always keep in mind with Cheniere's results is that its subsidiary partnership, Cheniere Energy Partners (CQP -1.82%), is the one that owns the Sabine Pass facility and it receives all of the revenue from the long-term contracted volume sales. For the quarter, $891 million of that $1.2 billion in revenue was on the Cheniere Energy Partners side of the business. The rest came from the parent company's marketing business that sells uncontracted production capacity and commissioning cargoes. The reason revenue origins matter is that the amount of revenue and cash flow Cheniere Energy Partners generates dictates how much cash gets distributed to the parent company.

Pretty much everything you need to know about Cheniere's operations was described above: Trains 1 to 3 are fully operational; Train 4 is in the testing phase; and the remaining liquefaction capacity at both Sabine Pass and Corpus Christi remain on schedule. The other event of note in the quarter was that management acquired about 500 acres of land adjacent to its Corpus Christi facility. Management has been in the process of getting a Corpus Christi expansion project approved. So this deal suggests that management is confident that it can obtain that approval.

Everything else that happened this quarter was related to project financing. The company was able to secure $2.1 billion in funding that was used to pay down shorter-term borrowings and fund its projects currently under construction. A promising sign of these debt issuances is that interest rates for those loans continue to decline and credit ratings continue to improve. For Cheniere, this should help lower interest expenses over time, which is important considering its sizable debt load.

On the company's conference call, CEO Jack Fusco commented on how well positioned Cheniere is to capture some unique opportunities in the LNG market.

The capacity of LNG we have available to market and sell to customers today is a significant advantage. That capacity can be flexible, giving us the ability to tailor solutions to different customer profiles and different customer needs on key terms such as tender, price and counter-party credit. These advantages position Cheniere to win in the global LNG marketplace and serve as a foundation for our continued growth. We believe our LNG expansion opportunities and potential growth investments along the LNG value chain, should be viewed by our customers, stakeholders and investors, has been a competitive advantage based on our ability to leverage our significant infrastructure and real estate positions, as well as the expertise we maintained throughout all aspects of project development, construction and operations.

It's astounding how quickly Cheniere's results have improved over the past year. While many investors were expecting to see some of the facility up and running by now, the pace at which cargo deliveries and revenue have grown is amazing. Also, it's encouraging to see that Cheniere can turn a modest profit today even though only 50% of its approved facilities are fully operational.

Once Train 4 at Sabine Pass starts commercial operations in the second half of the year, Cheniere's results are likely going to plateau for several quarters. Then results should pick up again once Corpus Christi and Sabine Pass Train 5 come on line in 2019. Since the company can generate profits now, investors will have a much easier time waiting for that next construction milestone.