Great Lakes Dredge & Dock Corporation (NASDAQ:GLDD) is hardly a household name -- unless the "house" you live in is the Pentagon.

I first stumbled upon this name years ago, in the course of my daily exercise of running down new contracts announced by the Pentagon. And I have to say, while it's unknown to most of investing America, Great Lakes Dredge & Dock stock makes pretty frequent appearances on the Pentagon contracts page -- most recently as the recipient of a $16.7 million contract to do dredging work for the U.S. Army Corps of Engineers  in Washington, Oregon, and California.

Granted, in Pentagon-contracting terms, $16.7 million seems like pocket change. But for a company of Great Lakes' size (just $277 million in market capitalization), it's actually pretty significant -- representing nearly 10% of a quarter's worth of revenues, as you can see from an examination of the company's quarterly report. 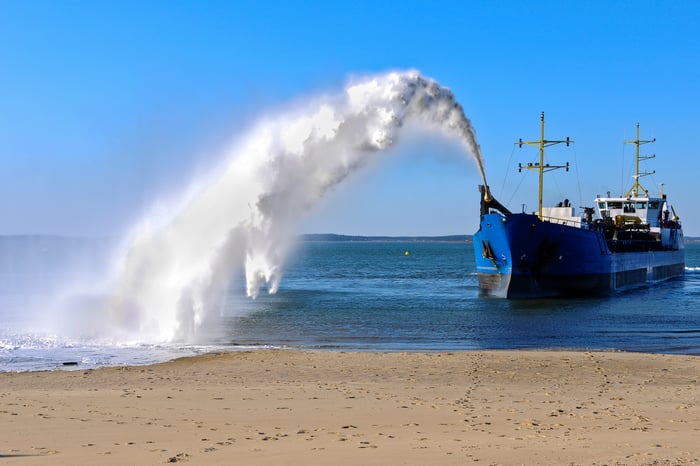 As luck would have it, Great Lakes Dredge & Dock reported its fiscal first-quarter 2017 earnings just yesterday. Here's how the news went:

Granted, $0.21 of those losses came from environmental and infrastructure businesses that Great Lakes says it has "discontinued," so presumably, they won't be hurting it in the future. But even so, $0.06 worth of the company's losses came from "continuing operations," which we have to assume will continue hurting it.

Commenting on the results, CFO Mark Marinko said they were basically "in line with our expectations," with the company's eponymous dredging business "quite strong." Of particular note, Great Lakes won 63% of the dredging projects for which it was eligible to bid in the United States, which shows you just how big of a fish this company is in the small pond that is the commercial dredging market.

Marinko noted that the company's recently refocused environmental and infrastructure unit is showing "marked improvement," despite losing money. Of particular note here is the 59% increase in backlogged work at this division -- which seems to promise sales gains in future quarters, if not necessarily profits.

As far as guidance for the rest of the year goes, Great Lakes Dredge & Dock gave none. Marinko did mention, though, that one of Great Lakes' biggest clients, the U.S. Army Corps of Engineers, has been funded by Congress with a "record" $6 billion to spend on dredging, infrastructure, and environmental remediation work this year. It stands to reason that Great Lakes will be bidding on its fair share of this work over the coming year -- and it won't even have to win much of it to surpass its $768 million in trailing sales.

Will it win the business, and more important, will Great Lakes be able to profit from it? That may depend much on how new CEO (and new U.S. citizen -- congrats!) Lasse Petterson steers the ship. A veteran of Norwegian companies such as Aker Maritime ASA, and more recently, Chicago Bridge & Iron, Petterson brings literally decades of work experience to Great Lakes Dredge & Dock.

For what it's worth, analysts are optimistic. According to data provided by Yahoo! Finance, Wall Street expects to see Great Lakes Dredge & Dock earn $0.14 per share by the end of this year, then grow that profit 50% in 2018. All I can say in response is that, based on the first quarter's numbers, they're off to a slow start...but we wish them luck.