Please ensure Javascript is enabled for purposes of website accessibility
Log In Help Join The Motley Fool
Free Article Join Over 1 Million Premium Members And Get More In-Depth Stock Guidance and Research
By Lee Samaha – May 8, 2017 at 12:42PM

The stock continues to trade at a discount to its peers, but is it on track to complete its objectives in 2017?

One of the advantages of owning a stock trading at a discount to its peers comes from the notion that all the company has to do is report an OK-looking set of results and investors are likely to reward it. In this context, I would argue that although United Technologies Corporation's (RTX -1.70%) recent first-quarter results were good enough to satisfy investors, they contained a mix of positives and negatives. That said, here are the key takeaways from the earnings so you can make up your own mind. 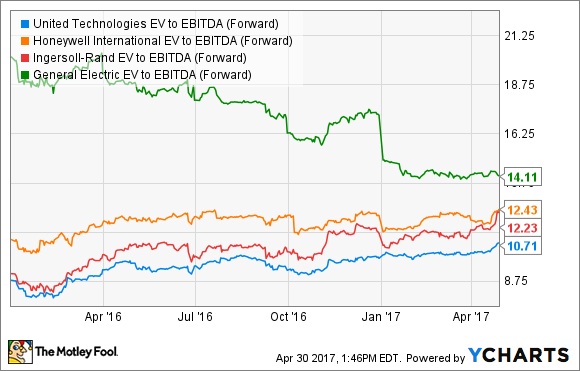 It's never a good thing when a company's largest customer declares the "demonstrated performance" of a key product as currently being "not satisfactory." In this case, it's Airbus (EADSY -2.07%) CFO Harald Wilhelm, talking about Pratt & Whitney's geared turbofan (GTF) on his company's recent first-quarter earnings call.

And it gets worse. Wilhelm indicated that Airbus' ability to meet its 2017 delivery targets on the Airbus A320neo was contingent on Pratt & Whitney's meeting GTF delivery targets.

In short, Pratt & Whitney is under pressure to deliver, not least from the two technical issues it's had with oil seals and combustor liner on the GTF.

Here's a summary of United Technologies' commentary on the GTF:

In short, there was no new news, and that in itself is a positive. However, as Airbus and others point out, Pratt & Whitney still has a job to do to fully satisfy customers. 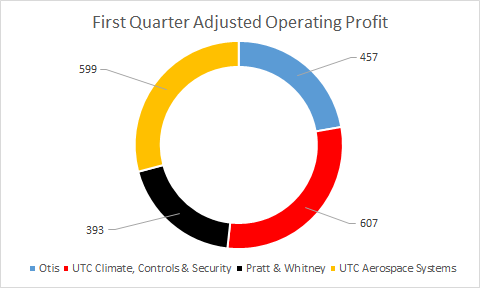 Management hopes to increase the revenue growth rate in climate, controls, and security (CCS), and there are clear signs it's set to achieve its aim. Although CCS organic sales growth was only 2% in the quarter, the following chart shows that CCS equipment orders are on a clear uptrend, suggesting that sales growth will increase in future quarters. 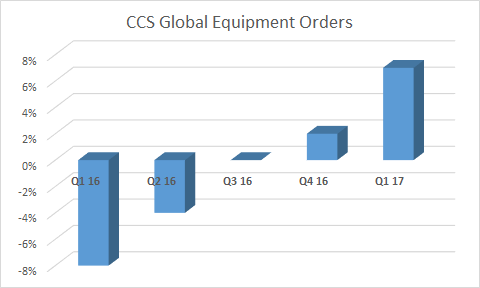 Hayes sought to reassure analysts by saying, "We'll get the margins back to where you expect" -- something to look out for in future quarters. 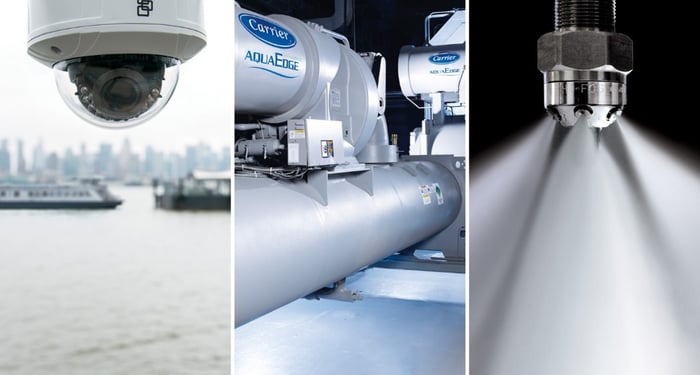 UTC aerospace systems had a good quarter, with organic sales growth of 5% spurred on by commercial aftermarket sales up 12% and commercial original equipment sales up 2%. The latter is particularly impressive, as United Technologies is seeking to offset declining sales on legacy aircraft with growth on new aircraft programs. Moreover, the adjusted operating margin expansion from last year's first quarter of 15.7% to 16.6% suggests the company is getting over the margin pressure from shifting to product sales on newer aircraft.

The news from Otis was somewhat mixed. On a positive note, overall new equipment orders were up 4%, and organic sales increased 3%. On the other hand, adjusted operating profit fell 4% to $457 million as Otis continued to suffer pricing pressure in China. To be fair, management's aim is to increase unit sales in the key China market to generate future services revenue. On that note, sales did increase 1% in units, but ongoing pricing pressure meant China orders declined 10% in dollar terms.

Is United Technologies still on track?

The company still has work to do on the GTF -- not least in delivering on its commitments to Airbus -- and pricing pressure on Otis in China is an ongoing concern. That said, CCS and aerospace systems had good starts to 2017, and management didn't change a single element of its segment sales and earnings guidance for 2017.

On balance, the results and commentary were good enough to convince investors that the company is on track for 2017, and that might be enough for the market to close the discount gap with its peers.