Berkshire Hathaway (NYSE:BRK.A) (NYSE:BRK.B) hosted its annual shareholders' meeting over the weekend, and expectedly the nuggets of investing wisdom that Warren Buffett shared have been making headlines on Monday. The Oracle of Omaha also made some bullish remarks regarding Apple (NASDAQ:AAPL), including that he leveraged experience from owning furniture stores to fully appreciate the iPhone maker's competitive advantages.

Buffett said that consumers often don't want the cheapest product, and Apple is able to justify its premium pricing since the iPhone is "very, very, very valuable product to people that build their lives around it," noting that the device appeals to a wide age spectrum of consumers. Actions speak louder than words, though, and Berkshire Hathaway has also disclosed that it has nearly tripled its position in Apple by market value. 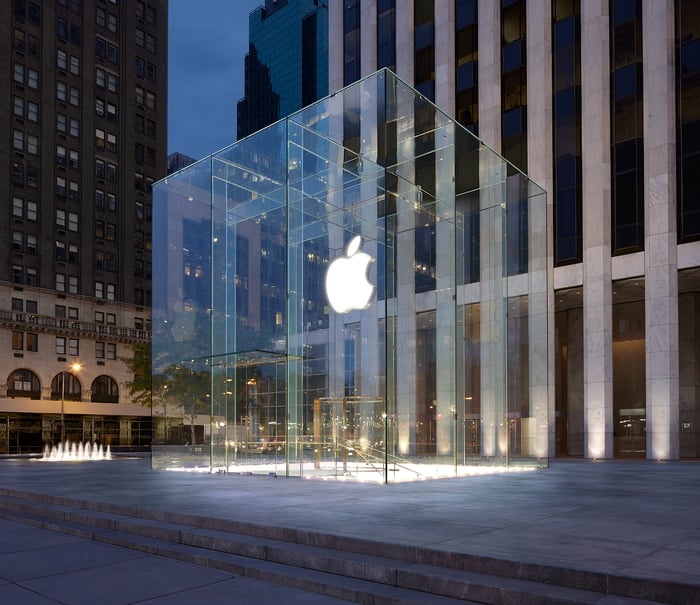 Berkshire's recent 10-Q shows that its position in Apple is now worth $19.2 billion, up from the $7.1 billion that it ended 2016 with. All told, Buffett's bullishness has helped push Apple shares higher today, hitting fresh all-time highs and driving Apple's market cap to over $800 billion -- a first for any company.

This is old news

Juicy headlines aside, much of this was actually already known. While Berkshire Hathaway hasn't filed its quarterly 13F with the SEC quite yet, which will detail its holdings at the end of the first quarter, it's fairly easy to deduce the size of its position based on the 10-Q disclosure.

Using the closing price of Apple shares on March 31 ($143.66), we can say that Berkshire held approximately 133.6 million shares at the end of the first quarter. That's hardly changed from Buffett's comments earlier this year that Berkshire held roughly 133 million shares (worth $17 billion at the time), more than doubling its position in January alone and up nearly tenfold over the prior four months.

Apple shares enjoyed a solid first quarter, gaining almost 25% and boosting the market value of Berkshire's holdings, even if the absolute number of shares was previously disclosed. 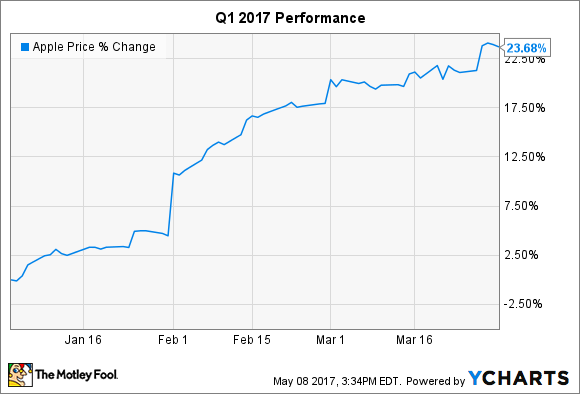 Apple could have already been a $1 trillion company by now

The $800 billion milestone is but the latest on Apple's journey to become the world's first $1 trillion company. Ironically, Apple would already be there by now if it weren't for that pesky share repurchase program. The company has now cumulatively repurchased a little over $150 billion in stock to date, but those buybacks have occurred at lower prices over the years.

It's more important to look at shares outstanding, particularly in the context of calculating Apple's market cap. Shares outstanding peaked in early 2013 at roughly 6.6 billion (split-adjusted). As of a few weeks ago, Apple had 5.2 billion shares outstanding. If we multiply the roughly 1.36 billion shares that have since been retired by current prices of about $153, that translates into an additional $208 billion in market cap that Apple could have if it hadn't aggressively started buying back its own stock hand over fist. 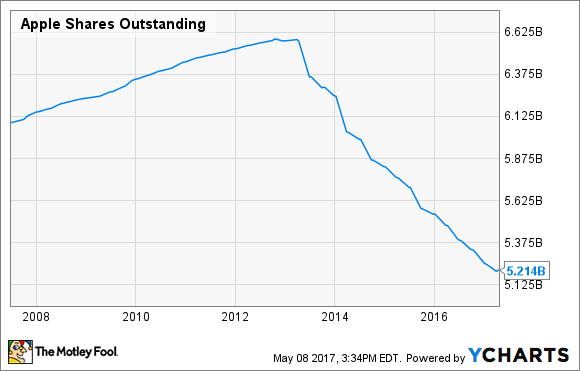 If anything, shares outstanding would have naturally climbed even higher from 6.6 billion over time due to stock-based compensation. Apple's market cap would be well into $1 trillion territory if it weren't for these factors.

Of course, measuring a company by market cap is fairly superficial. And even now Apple still has more cash than it can productively use. Put another way, Apple has returned $211 billion to shareholders, including dividends. If Apple had never pursued capital returns, in which case it would have never needed to issue debt, it would be worth over $1 trillion and have nearly $470 billion in cash on the balance sheet. Superficial titles aside, the capital return program was the absolute right call.

Apple will probably proceed to $1 trillion in short order anyway.