Small companies often face a dilemma: whether to sacrifice profit to spur growth or to accept a more modest position in their market while remaining profitable. Specialty food distributor Chefs' Warehouse (NASDAQ:CHEF) faces exactly that dilemma, and so far, it has tried to thread the needle and find ways to foster top-line growth while minimizing the amount of red ink it suffers.

Coming into Tuesday's first-quarter financial report, Chefs' Warehouse investors anticipated that the company would lose money, and they expected slowing revenue growth as well. The company did somewhat better than most had anticipated, and that could bode well for its future prospects looking ahead. Let's look more closely at Chefs' Warehouse and what its results say about its likely performance in the months and years to come. 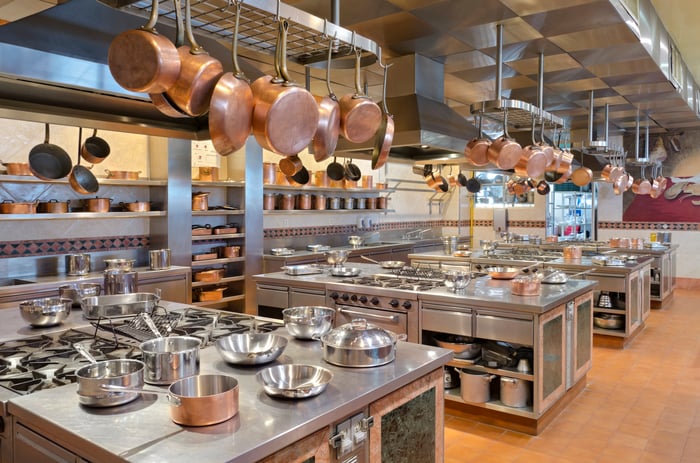 Chefs' Warehouse's first-quarter results weren't incredibly inspiring, but they were better than many had anticipated. Sales were up more than 10% to $287.7 million, which surpassed the 8% growth rate that most investors were looking to see. Chefs' Warehouse lost a net loss of $1.6 million, reversing a modest gain in the year-ago quarter, but adjusted losses of $0.05 per share were slightly narrower than the consensus forecast among investors.

Taking a closer look at Chefs' Warehouse's results, the company got a more balanced contribution from both organic growth and acquisitions. On the top line, organic sales gains amounted to 5.7% with the remaining gains coming from the acquisition of M.T. Food Service last summer. Case count growth was solid, rising 6%, with counts of unique customers and placements rising at a 4% to 6% clip.

Also, some of the pricing pressures that Chefs' Warehouse has suffered lately started to ease up. Protein prices fell 0.6% during the quarter, but the specialty division saw inflation of 1.1%, and that led to an overall 0.5% rise in prices to help support revenue growth.

Chefs' Warehouse faced challenges on the expense side of its business. Gross margin moved higher by nearly half a percentage point to 25.7%, but a rise in operating expenses weighed on the company's operating margin. Higher debt levels also boosted interest expense, which in turn contributed to the food specialist's losses.

CEO Chris Pappas was quite happy with Chefs' Warehouse's performance, especially given some adverse seasonal factors. "Despite the poor weather and Easter calendar shift during the quarter," Pappas said, "we executed very well and were able to meet our internal targets." The CEO also pointed to greater spending on technology and labor force to boost productivity and make Chefs' Warehouse leaner going forward.

Can Chefs' Warehouse get back into the black?

Chefs' Warehouse is optimistic about its future prospects. Between gains in case volumes and placements in the core specialty business and pounds delivered in the protein division, Chefs' Warehouse sees rising customer counts as a sign of future expansion.

As a sign of its optimism, Chefs' Warehouse made some changes to its guidance for the full 2017 year. The food distributor said that it now expects revenue to be within a range of $1.27 billion to $1.29 billion, which is higher by $10 million to $20 million from its previous guidance. The company also raised the lower end of its earnings guidance range by $0.02, now predicting that its bottom line will be between $0.36 to $0.41 per share for the full year.

Chefs' Warehouse investors seemed to be quite pleased by the news, and the stock climbed by nearly 7% in after-hours trading following the announcement. After having seen major struggles over the past several years, shareholders are happy to see signs of a possible turnaround, and Chefs' Warehouse will need to work hard to make the most of the rising opportunity that it's seeing in the food business.