Insys Therapeutics (NASDAQ:INSY) is up 9% in the last hour of trading Tuesday, having been up as much as 15% today after announcing first-quarter earnings and disclosing that the company is working to resolve the U.S. Department of Justice probe into the marketing of its pain medication Subsys.

The year-over-year comparisons weren't exactly pretty, with revenue falling 40% to $36 million, but lower sales of Subsys were expected as the crackdown on illegal use of prescription opioids continues. On the bottom line, Insys Therapeutics went from a $0.03-per-share profit in the year-ago quarter to a loss of $0.09 in the recently completed quarter.

Some of the loss came from a $2.1 million charge for Subsys inventory that can't be sold before it expires. Insys Therapeutics has cut back on sales and marketing expenses, but even with the lower costs, the spending on sales and marketing was still higher as a percentage of sales than in the year-ago quarter, cutting into operating profit.

On the plus side, and likely the main reason the shares are up, management is working toward a resolution of the Department of Justice investigation. 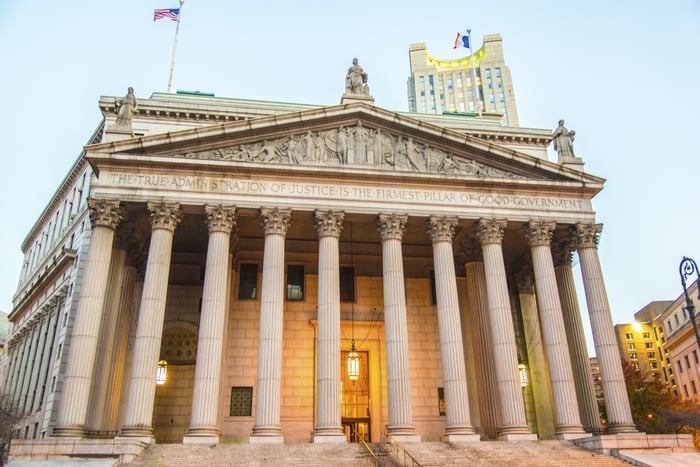 Despite the decline in sales of Subsys, Insys Therapeutics still has potential. The biotech has another drug, Syndros, which will launch in the second half of the year, following its approval by the Food and Drug Administration last year and scheduling by the Drug Enforcement Agency in March. And the company plans to submit a marketing application for buprenorphine later this year, potentially allowing it to go from one drug now to three drugs on the market.

Despite the potential, investors should keep in mind that Insys Therapeutics is still quite risky, since the resolution of the investigation into marketing of Subsys is still unknown. These things usually get settled to avoid having to go to court, but there's potential for crippling fines if the government wants to send a message to help stop the national epidemic of opioid abuse.