When people say "Any publicity is good publicity," they probably don't think about having their business in the news because a passenger was dragged off of one of their planes, or because a fight broke out at their section of the terminal, leading to multiple arrests.

In fact, when Oscar Wilde first said, "The only thing worse than being talked about is not being talked about," the late-1800s playwright probably could not imagine the impact of video cameras and a 24/7 news cycle. There may have been a time when any publicity was good publicity, but both United Airlines (NASDAQ:UAL) and Spirit Airlines (NYSE:SAVE) would probably argue that not being mentioned would be an improvement over the public attention both are getting now.

United, of course, made headlines after security officers dragged Dr. David Dao off a plane when he refused to get off at the airline's request due to a situation where it needed the seat to transport its own personnel. That story was accompanied by an amateur video showing the brutal removal, the accompanying screams, and other passengers begging for it to stop.

Spirit's negative publicity was not quite as bloody, but it may be equally as damaging: A fight broke out between passengers and airline personnel at Fort Lauderdale International Airport after nine flights were canceled. The cancellations were part of a bigger dispute between Spirit and its pilot union, which has led to hundreds of cancelled flights and over 20,000 stranded customers, according to CNN.

This is clearly bad publicity, but what's unclear is what happens next. Will America's airline passengers look elsewhere or will price, convenience, and in some cases a lack of choices keep them flying the not-always-so-friendly skies? 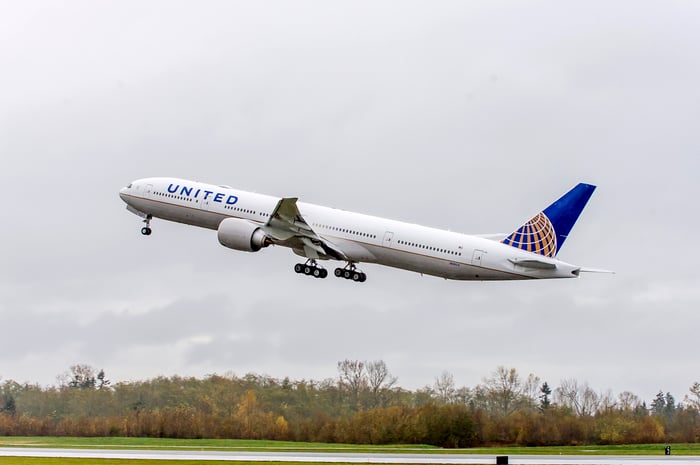 Since the Spirit customer brawl took place on the evening of May 8, it's too early to gauge any business impact. The United scandal, however, happened on April 9, and data from the airline, which The Los Angeles TImes reported on, show it has yet to suffer any negative business effects.

United carried 12 million passengers in April, a 7.6% increase over the same month a year ago. It also grew its passenger revenue miles (paying passengers times miles flown) by 7.4% and had 2.6% more of its seats filled.

Those numbers look promising for the airline, but given that many people schedule air travel well in advance of flying, the data may not accurately reflect current customer sentiment. The real impact (or lack of impact) will become evident in the months ahead.

It's also worth noting that neither United nor Spirit is particularly well-liked by consumers. Spirit ranked at the bottom while United was third from last on the recent American Customer Satisfaction Index Travel Report (registration required). Spirit scored a 61, down from a 62 last year, and United slightly improved from a 68 in 2016 to a 70 in 2017, still both below the industry average of 75.

Kevin Quigg, chief strategist at ACSI Funds (a sister company of ACSI), which uses the customer satisfaction data provided by ACSI as an investment methodology, explained in an email to to The Motley Fool that not all "bad" is the same. He acknowledged that both companies have perennially been at the bottom of their peer group in ACSI scoring, but explained that these scandals may hurt the two companies differently.

"Cost is an important factor in driving customer satisfaction in any purchase[;] however, its importance varies depending on customer expectations," he wrote. "United caters to a global customer base and is considered a 'premium airline,' so they greatly rely on customer[s'] 'gate to gate' experience to separate themselves from their competition."

United, he explained, is not committed to being the cheapest choice, but rather "the friendly skies." Because of that, he added, "an incident of this magnitude is greatly damaging to their business both short and long term." Because Spirit is a low-cost option that comes with lower expectations, the overall impact of its recent problems "should be less harmful."

What's the impact of these scandals?

While the optics are bad, Seth Kaplan, managing partner for Airline Weekly, told The Motley Fool via email that "the history with airlines and bad publicity is that one-off events -- even awful ones -- rarely have a long-term impact on airlines' business if they are truly isolated events."

He added that what's more important is the everyday reality of the airline's operation.

"Delta actually inconvenienced far more passengers last month than United or Spirit when it failed to recover smoothly after a big storm in Atlanta and canceled countless flights," he wrote. "But Delta overall has a reputation for reliability, so although it got some bad press, it largely got the benefit of the doubt from media and the public."

That airline, he noted, also defused tension by ordering pizza for stranded passengers. Making that type of gesture, along with built-up goodwill, helped Delta weather the storm while United and Spirit do not have that luxury.

"United and even Spirit, on the other hand, are both airlines that have actually improved their everyday operations somewhat in the past couple of years, but it takes time for an airline's reputation to catch up with reality when the improvements are recent," wrote Kaplan. "These events will kind of reset the clock on how long it will take for people to view them positively."

Ultimately, though, he does believe both companies could recover if they actually improve their day-to-day operations. And, of course, he added, "they will be OK in the long run, business-wise, as long as they don't have any more of these visually dramatic events."

United has aggressively responded to its situation after CEO Oscar Munoz's original comments appeared defensive. He has since changed his stance and the airline has reviewed and changed how it handles situations where flights are overbooked.

Spirit is still in the early days of its scandal, and problems with its pilots' union could cause a long, drawn-out situation, angering even more customers. In both cases, as Kaplan noted above, if the airlines clean up their acts and let time pass, consumers will be forgiving. Spirit may have an easier time of it because consumers expect less of the low-cost carrier, but ultimately even United should find its way back.