Good first-quarter results started 2017 on the right track for the streaming and royalty specialist.

The natural resources industry can be a tough place to make money, and the logistics of managing mining operations to maximize production can be extremely challenging. That's one reason why many investors like Franco-Nevada (FNV -1.79%), because it distances itself from actual operations by providing financing to miners in exchange for streaming interests in their production.

Coming into Tuesday's first-quarter financial report, Franco-Nevada investors were looking to see continued growth stemming largely from recent acquisitions. The company delivered better results than most had anticipated, and it sees a promising future ahead. Let's take a closer look at Franco-Nevada to see what its results say about its prospects down the road. 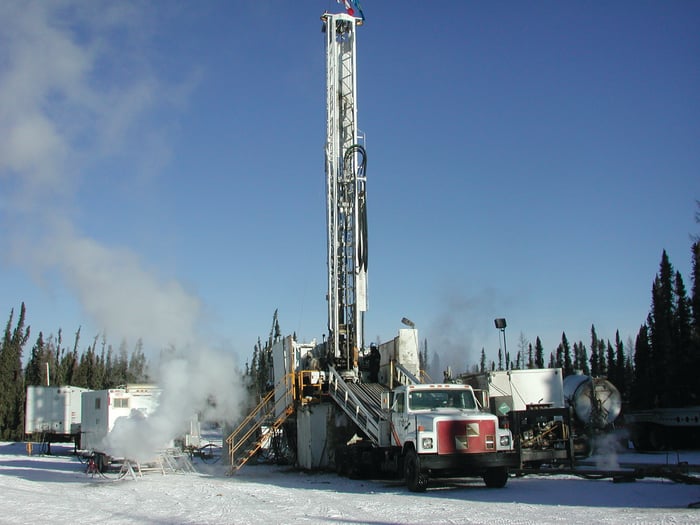 Franco-Nevada's first-quarter results continued the strong momentum that the company developed in 2016. Sales were up by 31% to $172.7 million, which was almost exactly what those following the stock had expected to see from the precious-metals streaming company and represented a record high for the company. Net income jumped by more than half to $45.6 million, and after taking some small extraordinary items into account, adjusted earnings of $0.25 per share were ahead of the consensus figure of $0.22.

Taking a closer look at Franco-Nevada's results, the company continued to post record performance on the throughput-production front. During the quarter, Franco-Nevada posted deliveries of almost 131,600 ounces, up by 23% from year-ago figures. More than three-quarters of those numbers came from gold, with silver and platinum group metals making up smaller portions of the company's overall production. Silver actually became a less important part of the equation for Franco-Nevada, as production was down and pulled revenue downward along with it.

Yet Franco-Nevada continues to look to broaden its natural resources umbrella to go beyond precious metals. The company has said that its future strategy involves a greater emphasis on oil and gas royalty interests, and Franco-Nevada brought in $10.9 million in revenue from its energy business. That's still a tiny portion of the company's overall sales, but investors can foresee that number becoming more important going forward.

CEO David Harquall gave a simple status report on the progress that Franco-Nevada has made. "Recent acquisitions are performing well," Harquall said, "and we continue to benefit from increased activity on many of our properties." The CEO also noted that the company's debt-free status gives it maximum opportunity to make future investments.

Franco-Nevada sees plenty of chances to boost profits in the future, and the oil and gas industry is a particular target area for the company. The Midland shale play acquisition hasn't yet closed, but Franco-Nevada believes that it will involve revenue being retroactive to the beginning of 2017. Moreover, further chances to cash in on the energy arena could come about, especially if weak crude oil prices put more financial pressure on exploration and production companies to find outside financing.

Yet a key question is how well the precious metals streams will perform going forward. The key Antapaccay mine in Peru has done well, but the Antamina property has seen weakening production levels. Yet Antamina's decline was anticipated, and new production opportunities with other projects around the world could help lift Franco-Nevada's overall numbers.

Franco-Nevada also rewarded investors with a higher dividend. The company gave investors a $0.01-per-share quarterly boost, now paying $0.23 per share. The increase was the 10th straight annual rise in the company's dividend, giving it an impressive track record that stands out in the typically cash-stingy precious metal sector.

Franco-Nevada investors celebrated the news, and the stock climbed 2% by midday Wednesday following the Tuesday night release. With solid prospects going forward, Franco-Nevada is giving investors what they want to see and should continue to do so in the months and years ahead.