The grocery delivery start-up is quickly surpassing AmazonFresh as the most important online grocery service.

Grocery delivery start-up Instacart is just half the age of Amazon.com's (AMZN -8.43%) rival service AmazonFresh, but it's growing up fast.

Late last month the delivery service announced a nationwide expansion, opening up new markets in Texas and the Midwest, including Detroit, Columbus, the Rio Grande Valley of Texas, and Las Vegas. Over the coming weeks, the company will expand to markets in Texas, Florida, the Carolinas, Kentucky, Tennessee, Michigan, and Ohio. Instacart now serves more than 40 metropolitan areas nationwide, compared to just 17 for AmazonFresh in the US. 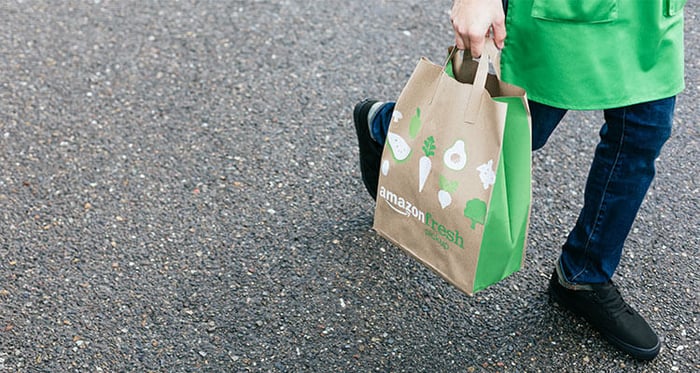 Amazon launched its Fresh grocery delivery service ten years ago, kicking it off in its hometown of Seattle in 2007. It took six more years for the company to bring it to another city, but Amazon has recently been ramping up expansion of the program. It also lowered the price from a $200/year additional charge over Prime to $15/month.

The company is also testing other ways of selling groceries, such as its new Amazon Go store, which is only available to employees, and AmazonFresh Pickup, the soon-to-open service that will allow customers to order on their phones and pick up the items.

It's clear why Amazon wants to get a foothold in groceries. The $800 billion domestic industry would open up a whole new revenue stream for the company, which it will increasingly need as Prime reaches a saturation point.

But Instacart seems to be beating AmazonFresh on almost every front, in addition to the number of markets it's available in and the yearlong free trial for some new members. Instacart is also expanding much faster than AmazonFresh and plans to make its services available to 80% of the country by next year.

Here are two key areas where Instacart is beating AmazonFresh:

Does anyone even want grocery delivery?

E-commerce seems to be taking over American retail sector by sector, from books to electronics to toys and now apparel. But groceries have remained largely immune to the online channel, as Americans seem to prefer shopping for fresh foods like produce and meat in person. Even AmazonFresh was not a new idea, as Ahold's Peapod delivery service dates back to before the internet.

Customers do not seem entirely happy with the service. AmazonFresh rates a middling 3.4 starts on its own site, with 606 reviews. Nearly as many reviewers gave it 1 star as 5 stars. Among the most common complaints were late or inaccurate deliveries and not picking up old delivery totes. Instacart was no better, receiving almost universally low ratings in about 100 reviews on Yelp and Sitejabber.

Instacart was recently valued at $3.4 billion in a recent fundraising round, putting it in line with Sprouts Farmers Market, but that value seems to underscore the fact that investors still don't believe in the disruption of delivery in the grocery industry. Disruptors in other industries like Uber and Airbnb are valued at nearly $70 billion and $30 billion respectively.

The sum of those factors would seem to bode poorly for AmazonFresh. It's not only losing ground to Instacart, but the market sees little value in grocery delivery itself, especially for a company valued at more than $400 billion. That may explain why Amazon is turning to alternatives to break into the grocery industry, but those have their own challenges as well.