Please ensure Javascript is enabled for purposes of website accessibility
Log In Help Join The Motley Fool
Free Article Join Over 1 Million Premium Members And Get More In-Depth Stock Guidance and Research
By Tyler Crowe - May 10, 2017 at 3:35PM

With plans to grow earnings 10% annually until 2021, it will need to keep delivering results like this for a while.

Now that Sempra Energy (SRE 1.96%) has squashed most fears that its Cameron liquefied natural gas export terminal was behind schedule, investors can focus on the more important things. Namely, how the company is performing today and how it can translate today's performance into funding for its ambitious growth plans. On that end, it did a reasonably good job this quarter, with steadily growing revenue and earnings.

Here's a brief look at Sempra's most recent quarter, what management thinks it needs to do to realize those growth plans, and what that means for investors over the long term. 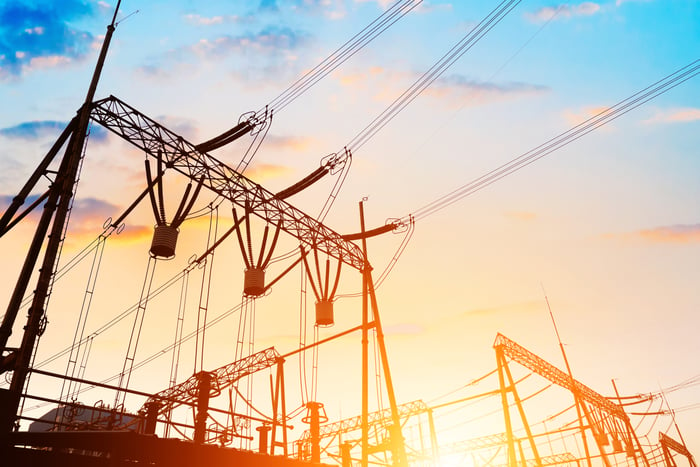 It would seem that Sempra's most recent quarterly results were quite good. Both adjusted and GAAP earnings were up considerably from the prior quarter. One thing to always keep in mind, though, is that Sempra's earnings are better in the winter months because of seasonal natural gas demand for home heating. The difference between Sempra's year-over-year results mostly has to do with an impairment related to the sale of the Rockies Express pipeline and a tax adjustment for its Mexican business.

In the fourth quarter of 2016, Sempra's management changed the way in which it reports its various business segments. Now, all of its separate utility businesses in the U.S. and South America are consolidated into its utility business, while its IEnova investment in Mexico, its renewable power business, its midstream infrastructure, and its liquefied natural gas business are all reported under infrastructure.

The one thing that is challenging about this new reporting style is how to determine what parts of each segment are performing well. Based on these results, though, we can assume that higher natural gas sales drove improved utility results and infrastructure improved compared to this time last year from those one-time adjustments mentioned above. 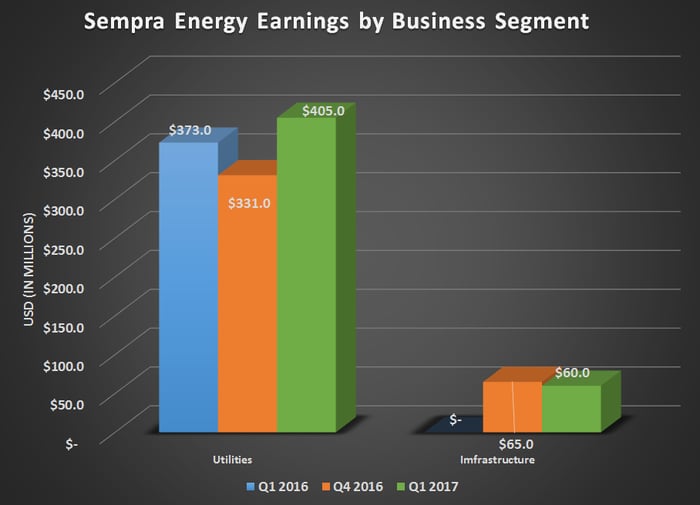 This most recent earnings release came less than a month after Sempra's analyst day presentation, so there wasn't much news for the company to report. The one thing that management did highlight is that it has an extensive suite of projects slated to come on line soon, one of which is the $900 million tied up in three natural gas pipelines owned by its IEnova subsidiary that will start commercial operations in the second quarter.

CEO Debra Reed's comments on the most recent quarter were quite brief because of the recent analyst day presentation. So instead, here is Reed's statement from its analyst day on how Sempra will measure success over the next five years.

[F]irst and foremost, we plan to deliver our 2017 EPS guidance. We're very committed to achieving those results. Second, we're dedicated to continuing our track record of very strong operational excellence. And we have learned and we continue to learn from the experiences that we've had to build better operations and improve the safety of those operations day after day and we apply those learnings across all of our businesses at Sempra. Third, we plan to deliver a long-term projected EPS growth rate and hopefully do more than that. And we feel like we can get there by a keen execution on the projects that we already have approved and contracted, but we're still focused on growing more projects. Fourth, we're committed to our expected 8% to 9% dividend increase and to reassess that dividend for further increases as Cameron comes online within the next year or so. And lastly, we are working toward capturing opportunities to increase or extend our above pure growth rates.

One peculiar element of Sempra's earnings release and presentation was that management went out of its way to say that the company had $2.5 billion to $4.5 billion in incremental debt capacity today. On the surface, that seems like a strange bit of news to highlight, but it's an acknowledgment that it is wildly outspending its current operational cash flows on its utility improvement projects and these Mexican natural gas lines. All of this spending is even before the company will have to start dedicating significant spending toward the completion of its Cameron LNG export terminal.

So far, though, management has done a good job of timing capital expenditures such that it promotes fast growth without completely overburdening the balance sheet. Those are the traits that investors in big, stable utilities want. Sempra still has some high hurdles to clear to meet its ambitious 2017-2021 growth plan, but it has stayed on track thus far and is a company worth watching.