Please ensure Javascript is enabled for purposes of website accessibility
Log In Help Join The Motley Fool
Free Article Join Over 1 Million Premium Members And Get More In-Depth Stock Guidance and Research
By Bradley Seth McNew – Updated May 10, 2017 at 5:23PM

The rubber-clog maker posted a better than expected Q1 -- but it's still planning for more store closures this year.

Shares of Crocs, Inc. (CROX 4.09%) surged 17% today, after the company reported its Q1 results. After the stock fell 30% throughout 2016, the growing earnings this quarter were a welcome surprise.

For the first quarter, Crocs reported sales of $268 million, about 4% below the same period last year, but ahead of Wall Street's expectations. However, the company was able to cut costs and thus posted earnings per share of $0.08, or $0.11 adjusted for special items -- a small increase over Q1 2016 and also ahead of estimates. Speaking on the better than expected results, Crocs CEO Gregg Ribatt said: "During the first quarter of 2017, we continued to execute against our strategic plan to strengthen the company and brand.  Customers responded favorably to our spring/summer 2017 product, enabling us to achieve revenues that exceeded our guidance, while simultaneously driving gross-margin improvements." 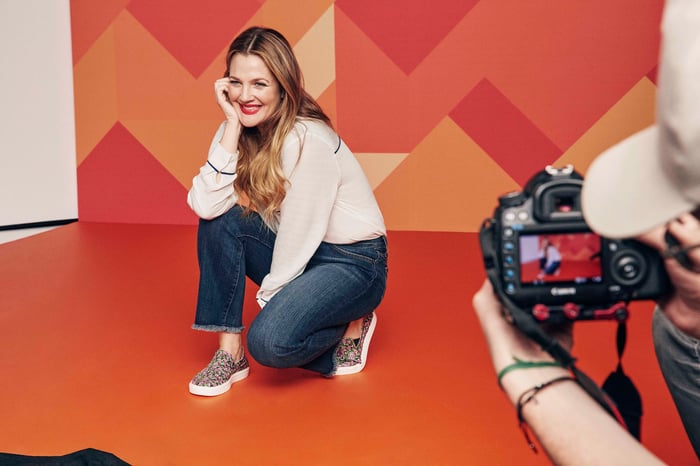 Crocs launched a new campaign this spring under the mantra "come as you are," with actress Drew Barrymore and other celebrities wearing their Crocs shoes. The campaign features everyday Crocs owners posting pictures of themselves in their Crocs shoes with the #ComeAsYouAre hashtag on their social media. In addition, the company will get a new CEO effective June 1, as current Crocs President Andrew Reese steps into the role.

While Crocs' momentum seems to be good right now, and the new marketing campaign and fresh CEO perspective seem encouraging for the year ahead, the company's declining sales are still worrisome. Management expects full-year revenue to continue to decline by low single digits over 2016. The company closed a net of 16 stores in Q1, and Ribatt went on to say in the release that the company has signed agreements to transfer 24 stores to distributors in Q2. Still, the company sees gross margin continuing to expand -- to as much as 50% this year, which is a high number for the footwear industry -- and plans to keep cutting costs, a good sign for future earnings.