Please ensure Javascript is enabled for purposes of website accessibility
Free Article Join Over 1 Million Premium Members And Get More In-Depth Stock Guidance and Research
By John Bromels - May 10, 2017 at 4:42PM

The oil and gas driller's stock took a big mid-month plunge on a seemingly-unimportant news item. Does it affect the stock's outlook?

W&T is a small company primarily focused on natural gas liquids production in the Gulf of Mexico. In April, its market cap dropped about $100 million to $280 million. Huge swings like that aren't uncommon for small companies, but what was unusual was the apparent lack of rationale for the drop. There's often some sort of catalyst for a drop like this: a broader market or sector decline, unfavorable industry news, or -- for an energy company -- falling oil or natural gas prices. As you can see from the blue line in the chart below, W&T stock's biggest drop came on April 18: 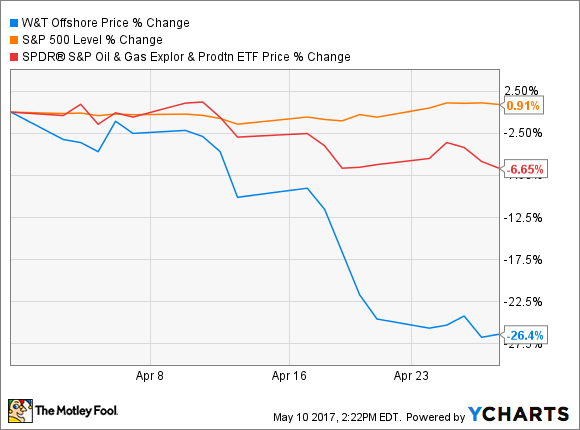 But as you can also see from the S&P 500's line on the chart above, there wasn't a broader market decline on that date. There was a bit of a drop in the overall oil and gas sector, but nothing that would account for the severity of W&T's slide. While other oil and gas producers -- particularly smaller ones -- dropped that day, none fell quite so far.

Nor where there any of the sort of company-specific causes one might expect to induce a big stock plunge: no underwhelming earnings report, no analyst downgrade, no unfavorable news coverage.

There was just one lone news item released by the company on April 18: Thomas F. Getten, the company's vice president, general counsel and secretary, who had been with W&T since 2006, retired and was succeeded by Shahid A. Ghauri.

It seems inconceivable that such a minor news item could have caused such a pronounced stock slide; it's certainly possible that the timing was just a coincidence. But sometimes even minor news items can have a big impact on small, volatile companies that don't put out a lot of information. So even though it sounds weird, this may have been one of those cases where a piece of minor news had an outsized impact, or just turned a moderate drop into a severe one.

Obviously, you shouldn't buy or sell this stock -- or probably any stock -- based on whether the company's general counsel is retiring. But it goes to show that investors in small, volatile companies -- and W&T is both -- may have to stomach wild stock swings that happen with little or no reason.

As for W&T, the company has underperformed almost its entire industry since oil prices started sliding in 2014, losing more than 86% of its value. And given that it cut its dividend to zero in late 2015, there are better and safer places for your money in the oil patch.

Why W&T Offshore Stock Rallied 12.5% at the Open Today

Why Oil Stocks Are On Fire Today