Almost every investor will get better results by investing in growth stocks and holding them for the long term. Our contributors write about three companies set to deliver.

Legendary investor Warren Buffett once wrote, "Someone is sitting in the shade today because someone planted a tree a long time ago." The key message is that it can take time for something small to grow bigger. But when it's done, it can sometimes be much bigger. For investors, growth stocks can be an excellent way to take a small sum of money and, over years, build great wealth.

Three of our top contributors think Shopify Inc. (US) (SHOP 7.96%), TripAdvisor Inc. (TRIP 5.53%), and Facebook Inc. (META 27.09%) are exactly the kinds of growth stocks to help you accomplish just that. Keep reading to learn why they think these three are worth buying and holding for years to come. 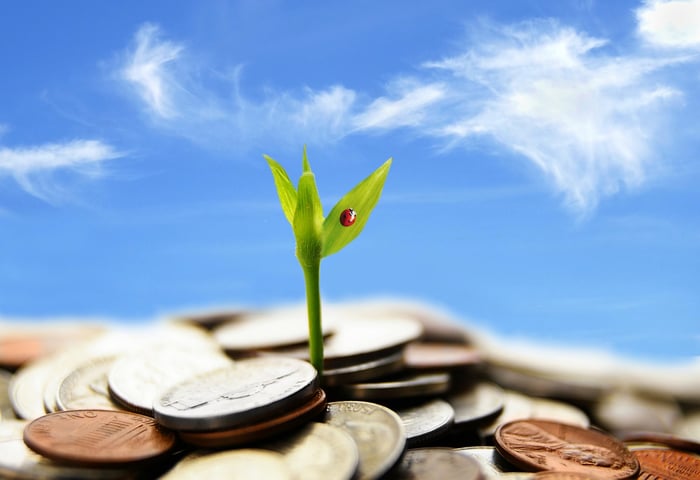 Jason Hall (Shopify Inc (US)): E-commerce is upending retail. According to a recent article in Forbes, 21 retail operators will close more than 3,500 stores this year alone. And some think this is just the tip of the iceberg, with countless small-store owners facing a similar fate. After all, when a major anchor tenant from a mall or shopping center closes up shop, the traffic decline can severely affect the prospects of every remaining small tenant in the property.

But one company, Shopify, is helping retailers find new life, providing them with the tools to compete in a changing retail landscape. In short, the company provides small and medium-sized businesses with the tools to sell online -- including through social-media platforms and apps as well as the web -- without having to become experts in e-commerce.

And business is booming. Revenue was up 75% in the most recent quarter, while Shopify's customers sold $4.8 billion in goods using the company's platform, up a staggering 81%.

Shopify is spending a lot of money to drive accelerated growth and is likely to continue reporting a GAAP loss for the foreseeable future. But just as with competitor (and now-partner) Amazon.com, Shopify's management is laser-focused on building a much bigger business in the long term. And with more and more merchants signing up for -- and profiting from -- the company's platform, Shopify is a growth stock to buy now and potentially hold for decades.

Demitri Kalogeropoulos (TripAdvisor Inc.):TripAdvisor doesn't look like much of growth stock these days, after sales dipped last year following a doubling of revenue in the three years ending in 2015. The travel specialist also endured slumping profits in 2016; net income fell to $120 million from $198 million.

But the company has a massive user base in an industry with a huge runway for growth as the $1.3 trillion travel market moves from offline to online purchasing. Just $567 billion of that total was spent through websites and apps last year, and TripAdvisor accounted for $1.5 billion of the segment.

Management has decided that the surest way to capture more of that growing pie over the long term is to build a world-class user experience for travel shoppers. In service of that goal, the company launched an instant-booking offering that, while adding convenience for customers and value for its partners, pushed revenue and earnings lower.

The sharply negative trends in both click-based and transaction revenue around hotel bookings improved in the last few quarters of 2016, which management called a transition year for the business. Still, with pressing demands for investments in the mobile platform, there are good reasons to expect bumpy earnings results ahead.

The good news is the company's hotel business looks poised to return to steady growth soon. Meanwhile, its non-hotel segment that includes attractions, restaurants, and vacation rentals, should start contributing to profits as early as this year. These strengths suggest that TripAdvisor has a good shot at recovering its momentum and producing solid results for long-term focused investors.

I believe the "wow" emoji would be apropos

Sean Williams (Facebook Inc.): It's incredible to be talking about a company with a $354 billion valuation as a growth stock, but there's seemingly nothing standing between Facebook and what's likely a $1 trillion-plus valuation over the long run.

All an investor needs to do is look at the active user statistics surrounding Facebook to get a feel for just how dominant it is. According to Facebook's fourth-quarter results, it ended 2016 with 1.86 billion monthly active users (MAUs), representing 17% year-over-year growth, with 94% of these users accessing Facebook via theif mobile device. In two years' time, Facebook added 470 million MAUs.

Facebook has also barely touched the tip of the iceberg in terms of monetizing these platforms. The vast majority of its revenue comes from ads on Facebook. It's only begun advertising on Instagram within the past couple of years, and it's not even cracked the surface on generating revenue from Messenger or WhatsApp yet. There are a seemingly endless number of revenue channels that Facebook has yet to tap.

The international market is another stomping ground for long-term growth. For instance, even though the U.S., Canada, and Europe combined for 580 million MAUs in the fourth quarter, its rest-of-world MAUs totaled 606 million. Yet the average revenue per user of rest-of-world MAUs is only $1.39 as of Q4 2016, compared with more than $19 per user in the U.S. and Canada. Foreign markets offer a potentially multi-decade growth opportunity for Facebook.

Considering that Facebook's PEG ratio is just a hair above 1.1 (which is still exceptionally cheap), I'm inclined to believe that this rapid growth stock is one you'll want to consider socking away for years, or decades, to come.